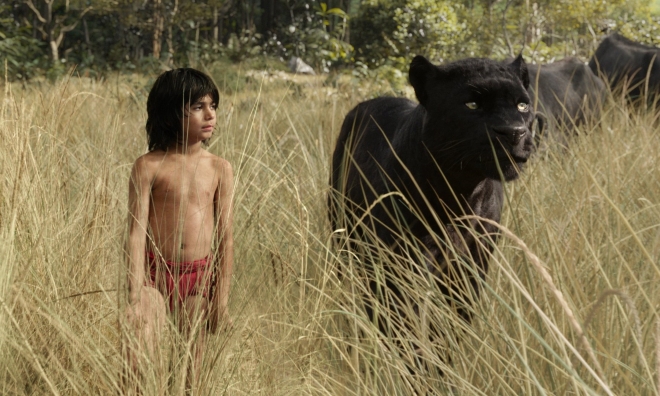 Remakes can often find themselves balancing precariously on a knife’s edge. Indulge in too much reverence to the original and you aren’t innovating enough. Abandon what made the first rendition such a success and audiences won’t have that satisfying trip down memory lane. Jon Favreau has an even harder task because his latest film is a reimagining of the beloved 1967 Disney classic, The Jungle Book. This new adaptation, which actually pays closer attention to Rudyard Kipling’s stories than the cartoon original, marks Disney’s third foray into live-action remakes of their golden era classics.

Neel Sethi takes on the role of the plucky man-cub Mowgli. This first-time actor had the challenging task of traversing a lavishly designed digital landscape populated with the characters we know so well, including the beautifully realised and much more rounded Bagheera (Ben Kingsley) and the loveable Baloo (Bill Murray). Sethi does a remarkable job given he was clambering around green-screen sets and is the only human character in the film, placing a great deal of weight on little shoulders. The jungle world we are plunged into has a larger-than-life aesthetic. The animals are bigger and more formidable and the trees that dominate the landscape are like monolithic skyscrapers draped in thickly woven vines. There are stunning shots of our diminutive hero walking with his protective panther foster-father amid the jungle canopy that make you lean into the screen to catch every detail. For an entirely digital landscape, it possesses a realistic degree of weight, never tumbling into the uncanny valley for a second.

The dynamic of Baloo and Bagheera has shifted from that of the animated version. Bagheera is no longer a worrisome mother figure, but now a domineering father. Baloo is a trickster who befriends the little child for his own benefit only to accidentally become his best-friend. An addition from Kipling’s book which was not as present in the ’67 version is wolf-mother Raksha, voiced expertly by Lupita Nyong’o. This triptych of characters shifts and flexes in their roles as surrogate parents trying to help Mowgli find his place in this dangerous world and are undoubtedly the great success of this remake. Idris Elba, who recently also supplied his voice-artist talents in Disney’s Zootropolis, takes on the role of the menacing Shere Khan, a scarred tiger who has a vendetta against Mowgli. Elba’s efforts in Zootropolis were less than successful, but here his low-growling voice supplies a terrifying foreboding to his interpretation of the character. Scarlett Johansson supplies her velvet voice to the slippery Kaa and offers up an all-too brief appearance that explains how Mowgli came to end up in the jungle.

There are moments that gel less well. Christopher Walken’s mobster-channelling King Louie (now a Gigantopithecus with an obsession with fire) offers up his take on I Wanna Be Like You, which manages to rhyme (more than once) the fact that he’s not an orangutan. However, Murray’s skat-inspired rendition of The Bare Necessities still manages to raise a smile. This is not the toe-tapping, episodic and jubilant original. It is darker, more mythical, more concerned with exploring ideas of place and home. This is perhaps why it is a success. Favreau tips his cap to the original but doesn’t feel honour-bound to adhere to it. While there is the odd bum note, The Jungle Book is an immersive, visually breathtaking family adventure and a welcome addition to their new spate of live-action reimaginings.