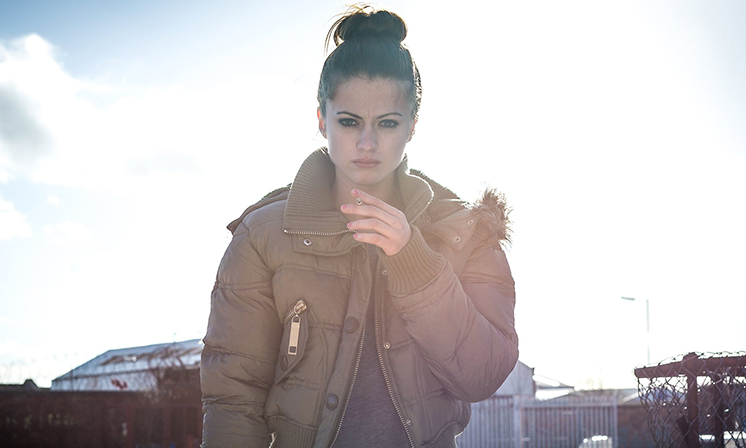 Ten years have passed since Shane Meadows’ This Is England punched a vitriolic, tattooed fist through the 1980s Midlands racial divide. Nationalist tension does not feature in novelist turned writer-director Helen Walsh’s The Violators but it is a comparably hard-hitting and bleak state of the British nation address. At a time where class division seems to be worsening, Walsh points an accusatory finger at a system that fails those who need it most, but also simply at how deplorably people can treat one another. An example of loving thy neighbour it is not, at least not unconditionally. Acts of kindness are not freely given and must be reciprocated, often in kind. This is but one of many galling elements of a frank, slow-burning and gritty realist film that will leave audiences seething.

Set in the littered and desolate industrial wastelands and housing estates of Birkenhead, The Violators is spearheaded by a tremendously fierce first time big screen performance from Lauren McQueen, whose slender shoulders bear the brunt of the harsh subject matter at hand. True to its unsettling title, this is an honest, fearless and very assured debut from a Liverpool-based filmmaker who looks no further than her own doorstep for material. McQueen plays 15 year-old Shelly. Lippy and brimming with viperish attitude, a fearsome glare is her first line of defence against circumstances well beyond what a girl of her tender age, or indeed any age, should ever have to handle. Out of school and running a household by scraping together whatever money she can, Shelly is responsible for raising her younger brother Jerome (Callum King Chadwick) as elder brother Andy (Derek Barr) is a verbally aggressive waste of space. Over time we learn of the abuse they each suffered at the hands of a now imprisoned father whose impending release is a slowly ticking time bomb.

With only sporadic visits from a social worker and no other parental influence, Shelly naively looks to local pawn shop owner Mikey (Stephen Lord) for protection. Initially trusting the lecherous reprobate, she is warned off by the enigmatic, well-to-do Rachel (Brogan Ellis). Of a similar age but from the other side of the tracks, the intentions of her bitter and cunning schemes are left intriguingly opaque. Above and beyond any barrier of class or opportunity, this kinship is one of two young girls susceptible to the evil of man-kind. Exactly what role these characters play in each other’s lives and what has gone before is revealed with patient precision by Walsh, her background in storytelling transferring very well to a carefully constructed piece.

Each and every locale in use here is a battleground which only heightens the uncomfortable viewing. With no safe ground to speak of Shelly is constantly on the move and cinematographer Tobin Jones follows her every move with an inquisitive, frequently unsteady hand-held camera. Cups of tea in the ramshackle back garden with the kindly boy next door (Liam Ainsworth) are too brief to offer respite from the day-to-day battle of survival. The Violators bravely paints a vicious circle without pulling any punches and shows real promise in a new female British filmmaker.