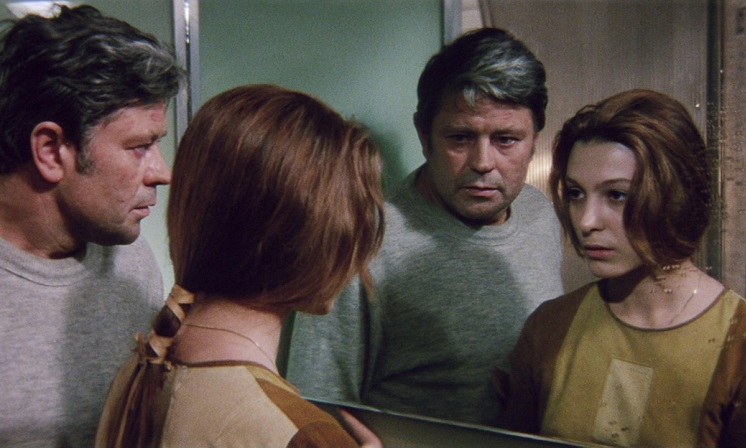 Science Fiction has regularly posited big timeless existential questions, even if the genre itself often superficially sports the kind of shiny furniture and fashion which rapidly dates. 2001: A Space Odyssey boldly offers the expanse of human history though the chairs in the orbiting space station are unmistakably 1968. Andrei Tarkovsky’s Solaris was his third film and as massive a generic leap as Kubrick’s. His previous features had involved a young boy in the midst of the horrors of the Eastern Front and a 15th Century monk in the midst of artistic crisis. And yet Tarkovsky’s reach for the stars was wholly in keeping with his striving curiosity and allowed him space to explore the nature of identity and love.

As if to disrupt the dichotomy between the grounded reality and the high romance of space travel, we begin earth bound at the dacha of psychologist Kris Kelvin, played with crumpled melancholy by the Lithuanian Rod Steiger, Donatas Banionis. However, from the very first images of bright green underwater fronds in the lake by the house, Tarkovsky’s eye is immediately attuned to the otherness of the world itself. In other words, the natural world is as marvellous and magical as anything ‘out there’. Kris is briefed on his mission to Solaris by a family friend Berton (Vladislav Dvorzhetsky) with his father (Nikolai Grinko) and his aunt listening in. The sacrifices and the dangers of the mission are readily apparent as Kris is to go to the space station above the planet where something very unusual is taking place. Everyone is aware that they might not see Kris again and he almost literally burns his bridges as he argues and then makes a bonfire of his stuff. But, undercutting everything, there’s also the sense that Kris is a bureaucrat, the government inspector, ready to close down a science project which has run over budget.

In a beautifully glib piece of dialogue – “when’s lift off?” “You’re already travelling” – Tarkovsky dispenses with the gee-whiz clichés of the genre. The traffic in Tokyo stands in as a more ‘science fiction’ reality than any model spaceship could hope to represent. Arriving on the space station, Kris finds it in a state of disrepair and the occupants Dr. Snaut (Jüri Järvet) and Dr. Sartorius (Andrei Rublev actor Anatoli Solonitsyn), hiding in their rooms and quivering on the edge of madness. Another scientist, Kris’ friend Gibarian, has killed himself and left a recording. The mystery resolves itself early on when Kris is visited by a guest – his dead wife Hari, played beautifully by Natalya Bondarchuk – and his mission and objectivity are fatally compromised.

The premise of the film and the novel itself is not that far away from a better episode of Star Trek, but Tarkovsky and his actors take the emotion seriously even as they are aware of that this could easily become, in the words of one of the characters, “second rate Dostoevsky”. Interestingly in one of the discussions between the Cosmonauts in Dr. Sartorius’ 19th Century furnished quarters, it isn’t the Russian greats who are quoted, but instead Cervantes’ Don Quixote, the masterpiece of comic/heroic self-delusion. Ultimately, if Kris believes he is in love and Hari believes she is in love, then surely they are in love and what does it matter where and who they are?

Steven Soderbergh would make a creditable (which is to say, not awful) pass at the novel in 2002. His film is slicker and the story is more filled out. In fact, for all the space, there’s a cramped feel to Tarkovsky’s version and not just in terms of the claustrophobia of the station. The generic confines would be broken in 1979 with his second Science Fiction adaptation and perhaps his masterpiece, Stalker.