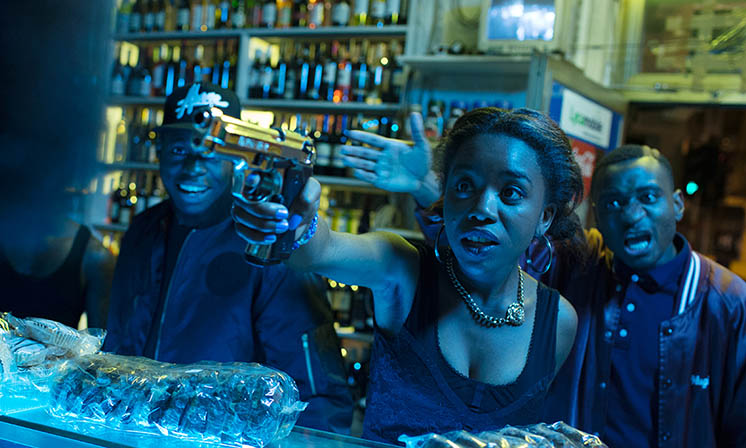 The now infamous Brussels municipality of Molenbeek provides the polemical backdrop to Black, a brutal modern retelling of Romeo and Juliet by directors Adil El Arbi and Bilall Fallah. A place name tragically familiar, the urban area has become synonymous with ISIS and Europe’s struggle with terrorism. There is no allusion to fundamentalism here but from its opening frames the headline-grabbing setting bears witness to virulent, violent conflicts that are no less pertinent: immigration, integration, the denigration of women, and gang violence. Though they’ve opted for the the shimmer of streetlights and a sombre, foreboding colour palette over monochrome, comparisons to Mathieu Kassozitz’s La Haine are not undue and the filmmakers have achieved a comparably gritty aesthetic.

Set in a similar milieu, Black exceeds its predecessor on a punishingly visceral level with multiple instances of unflinching sexual violence, recalling even the attack on Monica Belluci in Gaspar Noe’s Irreversible. They make for a sporadically shocking viewing experience and although by no means gratuitous – each contribute to compelling the narrative toward its inevitable conclusion – their ferocity is duly sickening and perhaps unnecessary. El Arbi and Fallah’s script may be drawn from a pair of novels by Flemish author Dirk Bracke, but the film is essentially an adaptation of the well known, and oft-adapted, Shakespeare play. Taking a fresh, biting look at a familiar tale while simultaneously seeking to comment on the ills of contemporary society is a two-edged sword and knowing where priorities lie is equally challenging. The filmmakers do a sterling job in terms of the latter: the issues of national identity, assimilation and clash of languages is foregrounded in early proceedings with Flemish, Arabic, French and a Congolese dialect flowing incongruously in and around one another.
Arrested for stealing a handbag, petty thief Marwan (Aboubakr Bensaihi) spies fellow teenage wrongdoer Mavela (Martha Canga Antonio) from across the corridor of a police station, she having shoplifted champagne from a supermarket “because she was thirsty.” It may not be love at first sight but the playfulness of their interaction precedes multiple montage sequences and getting-to-know- you scenes that follow. The crux of the matter here, though, is that he is from the Morrocan ‘1080s’ and she from a gang known as ‘The Black Bronx’ whose drug-pushing, extortion activities are surpassed by the evil subjugation and rape of their female members should they dare have ideas above their station. Mavela’s actions with a member of a rival gang qualify her for such treatment.
Offered short shrift by police who, for the great majority, operate under a mantra of guilty until proven innocent, there is little in the way of redeeming characteristics to convince us which – if either – group we should root for. And the star-crossed lovers’ relationship isn’t given the time to bloom into something that really pulls on our own heartstrings. Black is a visually and stylistically arresting endeavour, Canga Antonio’s performance stands out and its handling of sensitive current affairs is a brave move that does pay dividends but like its opposing tribes, who fight over turf and heritage, it never quite crosses the tracks in unison.
Matthew Anderson | @behind_theseens
Facebook
Twitter
Pinterest
LinkedIn
Go to mobile version