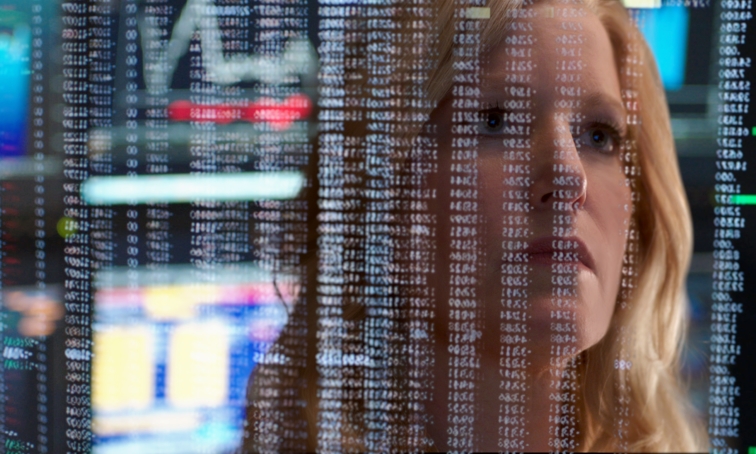 Equity claims to be the first film about Wall Street from a female perspective, and it certainly delivers on that promise by putting women – and the specific challenges they face in finance – front and centre. These include answering business calls while undergoing ultrasound, fending off the sexual advances of a wealthy client without wrecking a lucrative deal, and the stress of reconciling pregnancy with ambitious career goals. Anna Gunn (of Breaking Bad fame) plays Naomi Bishop, a steely, kickboxing investment banker renowned for her deal-sealing prowess.

Sarah Megan Thomas fills the role of her wispy, highly driven assistant, Erin. The ensemble of sharp-dressing protagonistas is completed by Alysia Reiner as Samantha, a former classmate of Naomi’s-turned-US Attorney prosecutor who is investigating several leading hedge fund honchos. That connection is emphasised at the start of Equity, as Naomi and Samantha sit on a panel together at an alumni women’s event discussing career motivations. Naomi does not hesitate to reveal her love of power and monetary compensation, telling the hushed audience that “I like money – like knowing I have it.” That unyielding desire for personal advancement is at the heart of the tale Equity sets out to tell.

There are double-crossings and sordid manipulation galore as everyone tries to get their hands on a booming tech company (Cachet) about to be listed on the stock exchange. Although things initially seem to be going well for Naomi – who is responsible for the deal’s success and chasing a lucrative promotion – internal disgruntlement at Cachet combined with sabotage from without herald conflict between Naomi and Erin (the latter also after a promotion) and the unexpected involvement of Samantha. One of the obvious morals of the story – as has typically been the case in cinema post-banking crash – is that people who work in finance are mostly ego-maniacal nihilists.

When Michael Connor (James Purefoy), Naomi’s transactional “friend with benefits” and the only real villain in the film, is asked by the latter whether “everything is a game” to him, he responds with a blasé “What else is there?” The static framing of the action and the frosty mise-en-scene – in truth there is not much to tell the bankers’ homes and offices apart – mirror the fundamental emptiness lurking behind the superficially thrilling (to use a Trump-ism) “Art of the Deal”. An exception to this is Samantha’s authentically cosy, colourful and child-inhabited apartment, and it is clearly no coincidence that she is the only key character not working in finance. Yet despite its indisputable grasp of the intricacies of investment banking and its perceptiveness of the difficulties involved in being a woman in that world, watching Equity leaves one feeling entertained but rather flat.

That is largely attributable to its television-like atmosphere, the result of Meera Menon’s highly conventional – in truth often boring – shooting and editing style that leaves all the creative work to Amy Fox’s script. And while that might suit some viewers just fine, the script itself has some weaknesses – such as a penchant for corny dialogue and unsubtle parallels – that have a tendency to jar. Equity’s efforts to maintain a constant level of slickness and sexiness also sometimes backfire, endowing it instead with a faint air of implausibility and at times even parody. None of this is to say that Equity is a poor film per se, far from it. For those working in or interested in finance, it is likely to provide additional rewards. But it lacks the cinematic calibre that sets great and excellent films apart from good ones.