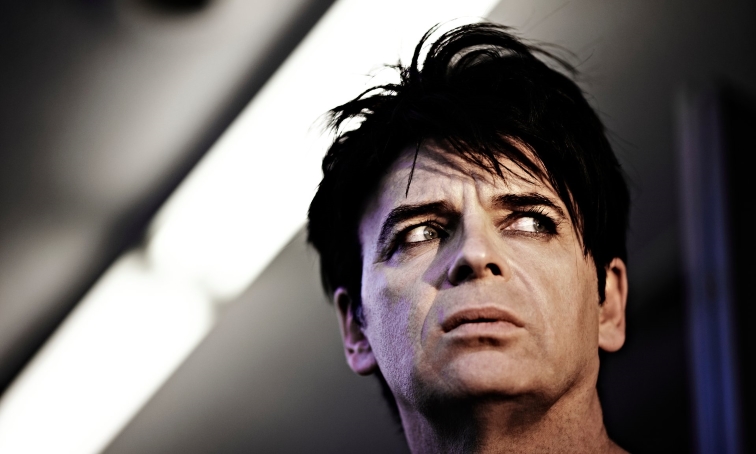 Coming out of the punk explosion of the 1970s, Gary Numan had a series of hits such as Are “Friends” Electric? and Cars, which saw him hit international fame, quickly become a millionaire and inspire a devoted following. Critically lambasted, he did himself no favours supporting Maggie Thatcher and giving interviews about his love of flying. The Moog-centric electronic sound ended up – like anything futuristic – dating rapidly and for the last thirty years Numan has pursued his own rather solitary path while at the same time having to handle the pressures of being in the ‘where are they now’ bin.

Gary Numan: Android in La La Land, the new documentary from Rob Alexander and Steve Read, is an affectionate and partisan portrait of the man in the machine. Its success – for anyone not already a Numanoid – actually comes from Numan’s own genuinely sweet persona, which, with his many anxieties and acute self-criticism on full display, undercuts some of the directors’ more grandiose claims about Numan the musician. A title card at the beginning of the doc charts his rise to becoming “one of the most famous men in the world” and makes claims to his three decades of making music, even though post-eighties, Numan dropped precipitously from view.

The directors follow Numan and his wife, and former super-fan, Gemma and their three daughters as they move from Britain to Los Angeles and complete his first album for six years: Splinter. In the process, Gary looks back on his career with disarming honesty. He talks about accidentally happening upon a Moog which was set to a sound he liked and how it revolutionised his sound. “It has hundreds of shittier sounds,” he confesses, but fortunately he was inspired to work out his new direction, believing that this was a pioneering effort that no one had done. “Of course, it wasn’t,” he admits. “There was Bowie and Kraftwerk.” Diagnosed late on with Asperger’s, Numan is fully aware of his inability to connect with people and credits his robotic persona with his attempt to allay his crippling stage fright. Fame and success brought very little relief as he bought a large house but only lived in one room, eating homemade chips and watching Monty Python and the Holy Grail every night.

Numan’s comeback album follows a period of particular difficulty as he weans himself off anti-depressants and tries to reconnect with his muse. His nervousness – at times terror – makes him one of the more unlikely rockstars. “I’m an anorak, a nerd,” he says, crediting his mother and father and his wife with looking after him and pulling him through. He admits to being embarrassed by people listening to him when he sings and is palpably nervous that his new work will be greeted with indifference by the public and hostility by the press. His disarmingly small ambition is for the album to chart and for people not to hate it, and it would be a stony-hearted viewer not to wish him well in his endeavour. Or perhaps an actual android.