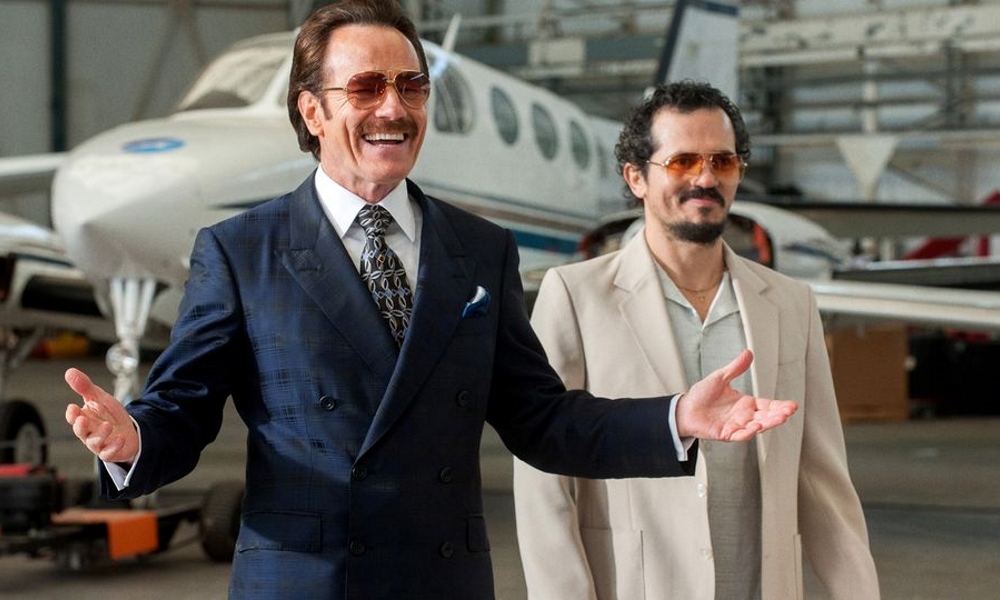 The Infiltrator does exactly what is says on the tin. This Bryan Cranston-led real life crime drama, telling of a lengthy undercover sting operation to ensnare Pablo Escobar’s mid-80s Florida drug operations, may not reach the blood-splattered heights of The Departed or Donnie Brasco but like director Brad Furman’s former project, The Lincoln Lawyer, the success of his latest rests at the more than capable feet of an actor in the form of his life. As for the role that proved Matthew McConaughey’s acting chops involved a lot more than perma-tanned abs, Furman brings out the big screen best from Cranston, famed for the totemic acclaim of AMC’s Breaking Bad.

Tampa: 1985. The Reagan’s’ War on Drugs is a disaster. The ruthless Medellín Cartel is channeling ludicrous amounts of cocaine through South Florida ports and up noses right across North America. Robert Mazur (Cranston), with jet black hair, a stupendous Frank Zappa moustache and chameleon skills of deception and misdirection, has grown tired of reeling in small fish and goes after the money for a bigger payday higher up the food chain. Under the ball-breaking, caustic direction of boss lady, Bonni Tischler (Amy Ryan – given a disappointingly sideline role), Robert and new partner, Emir (John Leguizamo), get to work worming their way into a dangerous world. And therein lies one of The Infiltrator‘s stumbling blocks; the world created by Furman never feels dangerous enough.

There is not the all-pervading sense of menace, unease and paranoia that operating in the pocket of one of the world’s most fearsome ever criminals would surely facilitate. There are a few close shaves, Emir’s cover is nearly blown, a suitcase malfunction reveals a recording device but in following the procedural nature of a case like this the film comes to feel fairly formulaic and, even, predictable. Based on real events, there’s only so much that can be done to jumpstart the material but the film never gains the impetus that it should. The delivery of a miniature coffin filled with blood – a signature warning by nice guy Pablo – is enough for the marital and familial strain to take effect but as much as those around them speak of peril, never is there the sense of real harm coming to the central duo. Loyal to his wife (Juliet Aubrey) in the face of scantily clad distraction, Robert doesn’t skim money off the top and is as strait-laced as they come. Leguizamo, with whom the director collaborated on both The Take and The Lincoln Lawyer, is superb as the firebrand foil to Cranston’s lead.

The perennially elegant Diane Kruger is a feisty and fearless faux-fiancée as she and Robert befriend Escobar’s money man, Roberto Alcaino (Benjamin Bratt) and his wife, Gloria (Elena Anaya), lines between the amicable and professional becoming blurred. The Infiltrator is never dull; over exposed colours, great costume and a solid soundtrack make it very watchable and the performances are strong, but perfunctory moments of high tension are too few and far between to make this a truly gripping thriller. That said, it’s impossible to be bored of Cranston at his magnetic best and this marks another step in right direction for a very strong actor.