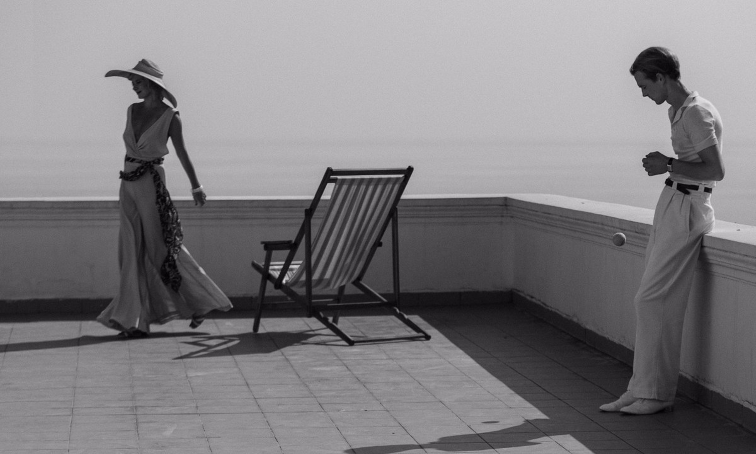 There’s a lot that’s wonderful about Andrei Konchalovsky’s Holocaust drama Paradise and yet there’s something fundamentally wrong with the film. Beginning in France in the 1940s, we first meet a French police officer in the upper echelons of the Vichy regime. He’s a family man who enjoys brisk walks in the woods with his son before work. Jules (Christian Duquesne) has a chubby comic look to him and so it’s disturbing when you realise he’s sending people to the concentration camps. One prisoner is a Russian aristocrat called Olga (Julia Vysotskaya) who has been arrested for shielding two Jewish children.

Hoping to escape punishment, Julia offers herself to Jules and he accepts the deal. During a series of interviews given directly to camera, the characters reveal their backgrounds and talk about how they were feeling in the scenes we witness. There are purposefully jagged snips as all the questions are removed and occasionally the film burns and scratches. The interviewees wear pajama-like uniforms. Have they been arrested? Is this another camp? An interrogation? Thing become stranger when Jules is killed by the resistance, but his interviews continue posthumously. Without the corruptible Jules, Olga’s position worsens considerably. We then join Helmut (Christian Clauss), a cultured nobleman of good family and a convinced young Nazi, who is tasked by Heinrich Himmler in person with auditing the concentration and death camps. He’s a Russophile and a stickler for rules, willing to execute fellow soldiers and commandants caught with the hands in the till.

The gargantuan and grotesque irony that there is a proper and correct way to run a death camp is evident. “Without corruption life would be inhumane,” Krauss (Peter Kurth), a commandant under investigation, pleads. The man complaining about the inhumanity of the audit is also responsible for ten thousand deaths a day. However, it’s at this camp that Helmut finds Olga, a woman he met and fell in love with in a villa in Italy. For a lover of Chekhov, this is a nicely Chekhovian interlude. Olga soon sees a possibility of salvation, as Helmut begins to feel his faith in the Nazi paradise beginning to tremble. Konchalovsky is an eclectic filmmaker who has brought to the screens films as diverse as his debut The First Teacher to his Hollywood outings like Tango & Cash and, his last Venice effort The Postman’s White Nights. The beautiful black and white cinematography of Alexander Simonov and the meticulous and careful framing of the shots makes Paradise visually sumptuous – perhaps too much so.

This arch arty feel is not helped by some of the later more melodramatic turns. The Holocaust as a historical subject is resistant to narrative, with its finding of meaning, its yearning for resolution. Even the name Holocaust can be seen as gracing the mass murder with something like a reason, an explanation and by implication a justification. The religious revelation that concludes Paradise ultimately bankrupts the depiction of the horrors. *Spoiler*: There’s the possibility that the arrival of God is meant to add another layer of irony – after all the pre-Heaven interrogations are not at the Pearly Gates, but in interrogation rooms with the dead wearing something not dissimilar to death camp uniforms – but this seems an unwarranted stretch.