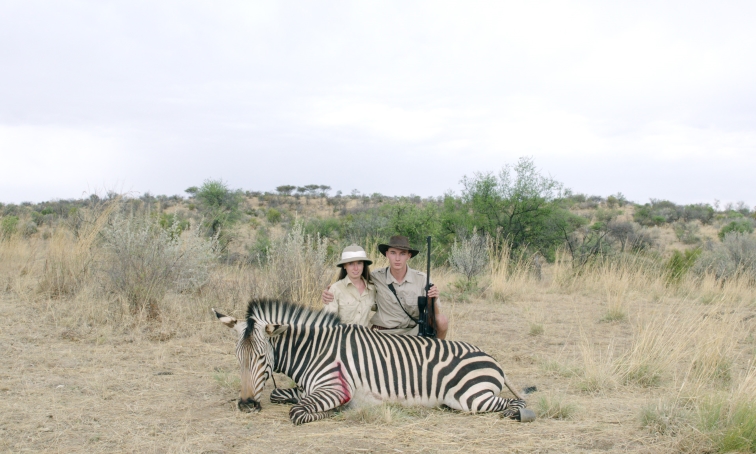 “The killing is only a small part,” says Gerald, one of the subjects of Ulrich Seidl’s new film Safari. By its conclusion you may well be inclined to agree with him. There’s the stalking, the anticipation, the price list, like some murderous menu for the hunters to browse through, the stalking of the prey – aided by local guides and experts – the sitting in hides and drinking beer, the small rituals attendant on hunting and the skinning and butchery of the animals themselves. So yes: killing is only a small part. Seidl continues in his mission to depress everyone with the genuinely grotesqueness of humanity.

We’re at a hunter’s lodge in Namibia, a place where tourists go to kill big game and play at being hunters. Warthogs, buffalo, zebra, lions, monkeys and giraffes are all on the aforementioned price list. There are an old and overweight couple. Seidl frames them to make them look as gormless as possible and then allows them to hang themselves with their own words. In the end, they turn out to be relatively harmless. Hubby goes to sit in the hide, guzzle beer, burp and doze off while his wife lies on a sun lounger in the Tiger Lodge and basks under the African sun. Hemingway this is not. Gerald and his wife Tina along with their teenage children are more active and deadly.

Each one of the characters want to bag (they prefer this term to kill) a beast. We see them stalk the various animals through the brush, attended by guides and armed with a tripod, binoculars and powerful rifles. The paraphernalia and the locals give the paying customers what they want and facilitate the kill to such an extent as to rob from the ‘sport’ any possible claim to some atavistic return to natural roles. This is consumerism and even the ‘wild’ animals are kept stocked up so that the customers will have trophies to mount. That said, Safari is a slippery customer. Hunters could happily watch it as an exciting collection of kills. Cinematographer Wolfgang Thaler keeps his camera focused on the hunters rather than the animals. Watching their reactions – the obvious physical rush, the weird almost sexual release at the kill – and then their exchange of silly ‘hunter’s “Hail” greeting and the posing of the animals with the obligatory photograph.

The later butchery is grimly fascinating but many, who haven’t been to a Danish zoo recently, will find it stomach-churning. The animals get bigger as the film goes on and the sight of a giraffe shot and dying in front of our eyes had many in the audience openly sobbing. Again, pro-hunters might see some kind of beauty in all this. Seidl never uses a commentary in his documentaries, and this is probably because his own voice is already so loud that a conventional voiceover would diminish it. He frames his subjects gazing in silence at the camera, unaware that what impala are to them, they are to Seidl. This is particularly problematic when he turns his camera on the Namibians who work at the Tiger Lodge.

The workers are shown butchering the animals and are undoubtedly glad of the extra meat to take home, but what do we learn by seeing them gnawing on the meat staring into the camera. An image of a black girl standing in front of a wall of trophies holding a stuffed monkey seems stupidly provocative. Why even go and see a Seidl joint? It’s a valid question. The Austrian director through his fiction and his documentaries has created a vision of the world that is obsessive in the basements and margins, the malignant banal. He is without a doubt the master of his nihilistic domain, but it isn’t a good place to be and it’s uncertain whether anything can be usefully learned. The owner of the Tiger Lodge muses on the world saying: “The world would be better off without people” – that’s Seidl’s voice right there.