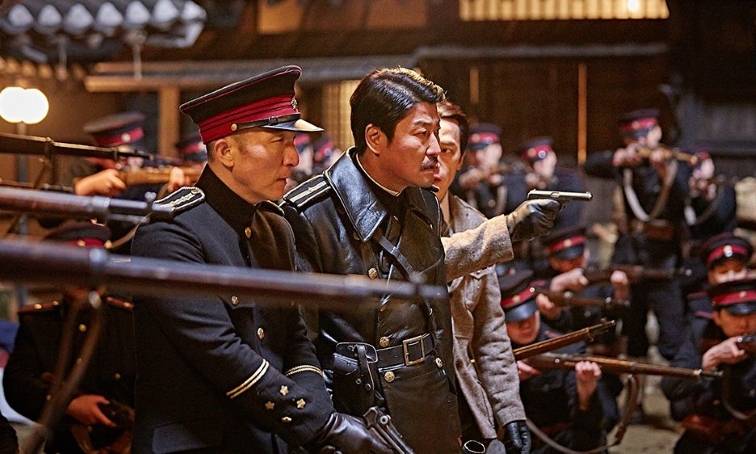 Korean director Kim Jee-woon is a prolific and accomplished generic gadfly with a western – The Good, The Bad and The Weird – a horror – A Tale of Two Sisters – and a superlative revenge thriller – I Saw the Devil – all under his belt. With his new film The Age of Shadows, showing out of competition at Venice, Kim manages to tick off another couple of genres at once: the shadowy espionage thriller and the no holds barred gangster movie. It’s the 1920s and Korea is under Japanese occupation.

The film opens with resistance fighter Kim Jan-ok (Park Hee-soon) cornered after being betrayed while trying to raise funds for the resistance. After a thrilling nighttime rooftop pursuit, Kim is finally brought to ground by Captain Lee Jung-chool (Song Kang-ho), a former freedom fighter who now works for the Japanese police weeding out the resistance. The face-off can really only have one result but Lee is left shaken by the heroic death of his former classmate and comrade. He will be further compromised by his meeting with Kim Woo-jin (Gong Yoo), an antique dealer using rare objects to fund the purchase of explosives from Hungarians. A game of cat-and-mouse begins as Lee tries to infiltrate the group while himself being courted by the leader of the resistance who wants to turn him.

Our man is also being shadowed/assisted by a sadistic Japanese policeman Hashimoto (played with fiendish zeal by Um Tae-goo), who is gunning for the top job and has more than a sneaking suspicion that Lee, being Korean, is overly sympathetic to their quarry. Tension begins to build as the police and the resistance circle each other and gets to the high point when they are all on the same train to Seoul, having discovered that there is a police mole in the group. The tension explodes with a splintering action sequence – eat your heart out Spectre – which is then almost topped by another brilliantly executed fight scene in the railway station. There’s no let up to the drama as members of the group are captured and tortured – some typically grisly scenes – and Lee will finally be forced to choose sides.

The murky world of betrayal and counter-betrayal is reminiscent of Jean-Pierre Melville’s magnum opus Army of Shadows, but the masterful orchestration of tension also shows the influence of Brian De Palma’s The Untouchables. The use of music throughout is excellent with a percussive score mixing with period pieces of jazz and a concluding scene uses Bolero to stunning effect. The Age of Shadows is a bloody and breathtaking piece of filmmaking which confirms that Kim can do pretty much anything.