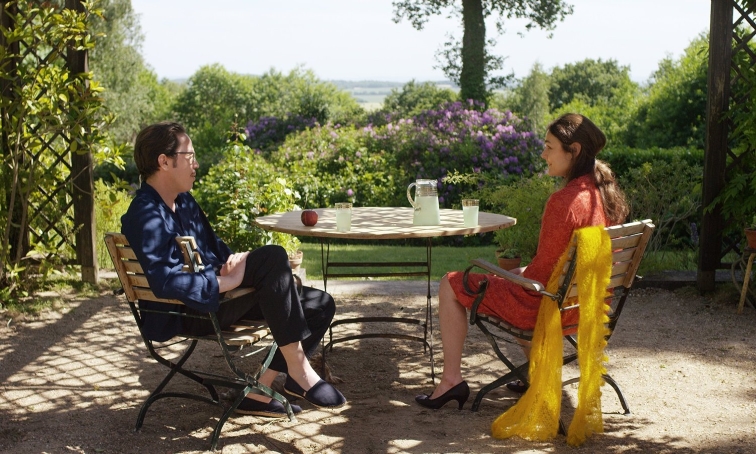 You know when you buy a new camera, go into the garden to try it out and just snap things to see how the photographs look without necessarily caring what you capture? That’s basically what director Wim Wenders seems to be doing with new film The Beautiful Days of Aranjuez. Beginning with a series of shots of a depopulated Paris, stunning in the summer sun as the camera slowly pans and the wind rustles the bright green leaves in the trees to the strains of Lou Reed’s Perfect Day.

We rest on a house in the countryside. A writer (Jens Harzer) is starting his day staring glumly out the window at the terrace, a table and two chairs. Riffing on Pirandello, this is more an author in search of two characters then vice versa. Reda Kateb is the sleek and assured man who trades in observations of the minutiae of the natural world and fond memories of Spain, while Sophie Semin is the woman who talks more and recounts under the questioning of her male companion a variety of sexual encounters. The writer seems to struggle more with the female voice.

Whereas the man mutters effortlessly, the woman repeats the same phrase six or seven times searching for the right word. Sometimes the interactions are interesting. Occasionally they are dull. There are two glasses and a jug of lemonade. There is a dog and an apple on the table. The writer himself gets bored at times and chooses another tune on the jukebox. Nick Cave turns up to play the piano once, in what feels like an opportunistic piece of casting. Why don’t any of the other records transform into the artists performing? Is it just because Cave appeared in Wings of Desire?

It’s all so random and the 3D Kodachrome colours, poised performances and careful framing can’t disguise the fact that The Beautiful Days of Aranjuez has very little to say. The essential emptiness allows for an occasionally interesting reverie as the writer wanders in the woods and then back to his desk, but only a writer would think that writer trying to think of story makes for an interesting story. Wenders and Peter Handke have collaborated in the past to much happier effect. But this outdoor promenade performance of Handke’s stage play never finds a compelling reason to exist or for anyone to sit through it. Still, it is a very good camera.