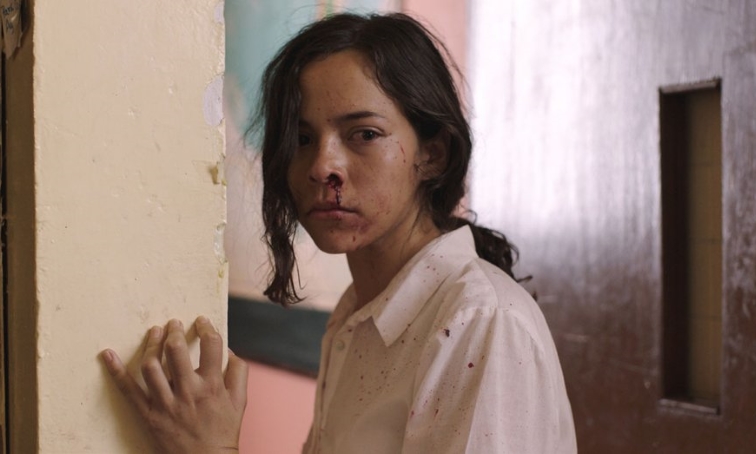 Imagine if H.P. Lovecraft had written The Joy of Sex, or better still a porn parody of Andrei Tarkovsky’s Stalker. Neither of these analogies are particularly accurate but we’re in the right territory – the wild region to use a more literal translation of the original title – for Mexican director Amat Escalante’s polymorphously perverse fantasy The Untamed, slopping onto the Venice Lido this week. A massive asteroid or perhaps a rock-like spaceship hangs in the cold vastness of space. From here, we go to a dark sweaty place where a young woman Veronica (Simone Bucio) is having sex with a large tentacle.

When Veronica emerges there’s a large painful bite wound. At the hospital she’s treated by Fabian (Eden Villavicencio), a young, sympathetic nurse who warns her about rabies. His sister Alejandra (Ruth Ramos) is married to Angel (Jesús Meza) and has two impish boys. Their marriage is apparently unsatisfying for the pair of them. Alejandra masturbates in the shower following sex and Angel (note the misnomer) enjoys sneaky secret trysts with Fabian while spewing homophobia to his pals and wife. Veronica’s friendship with Fabian and later Alejandra leads her to introduce them to the modest shack in the middle of the countryside where the alien creature is being kept in the cellar by a middle-aged couple. Whether she’s doing this as an act of evangelism or as a way of feeding the beast is unclear.

Veronica’s own frail, soulful face has an uncanny quality and there’s an echo of Scarlett Johansson’s alien from Under the Skin. The verdant, Edenic area surrounding the hut is reminiscent of both the Dacha in Solaris and the Zone in Stalker, all fronds and soil, with the creature itself a symbolic blank which could stand for any number of possibilities or simply its slimy, squirming self. Veronica explains how the creature returns you to your most primitive desires, but as with the Room in Stalker, it’s ambiguous whether this return will be enlightening, invigorating or fatal. This fatality will lead to harsh consequences – perhaps a comeuppance – for Angel and an awakening and liberation for Alejandra.

His fourth film, Escalante broke through into the international limelight with his Cannes cartel drama Heli. The film was traumatic and unflinching in its depiction of torture, but tonally strange, with its introduction of libidinal police detective. The Untamed revels in a release of repression, and an escape from the stifling repression, or containment of desire. The comedy is obsidian and sly, but occasionally nicely ordinary as with the incredibly naturalistic depiction of Alejandra’s young children, who are also two recent alien invaders. The details of domestic life – work, kitchens, bathrooms etc. – are set against the need for fulfilling oblivion and the women are the focus here.

Escalante returns to the vagina as a locus of interest and enigma, but this is not simply ‘ooh-err’ provocation à la compatriot Gaspar Noé. The Untamed is an examination of the strange otherworldly nature of desire, the way sex is often out of joint with our desires and expectations, even with our identities. How we are so often unfulfilled. The twining tentacles and the slurping bodies have hints of body horror, but are ultimately no stranger than the scenes of human coupling captured in explicit detail from unconventional angles: fornication red in tooth and claw.