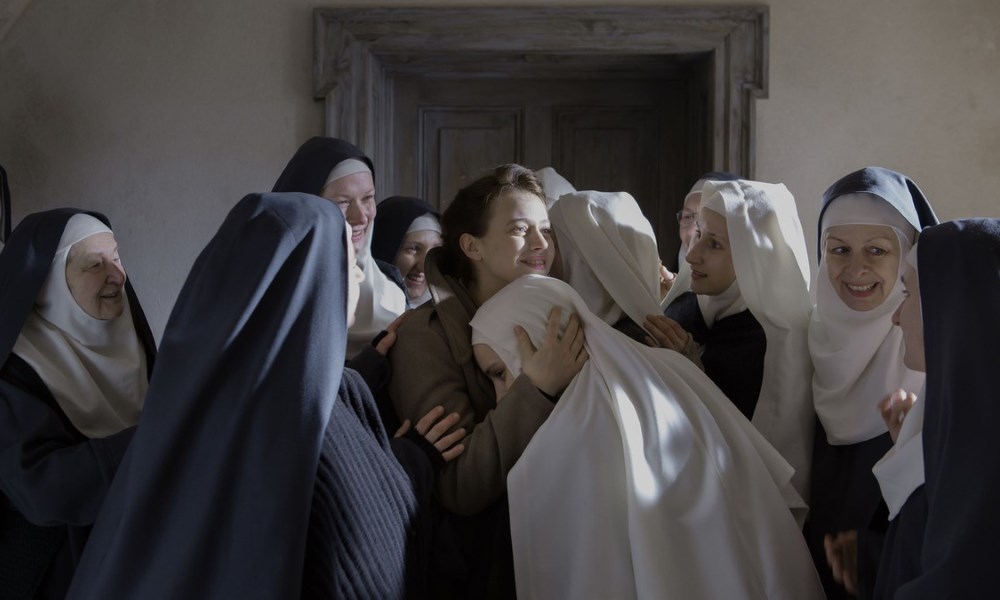 On the surface, Anne Fontaine’s latest film The Innocents seems to have a lot in common with Pawel Pawlikowski’s recent masterpiece Ida. Both take place in convents in post-World War II Poland, and both feature the familiar imagery of veiled devotees, hushed ritual and religious iconography. But while Ida is the story of a young woman leaving her sheltered existence to experience the world for the first time, in The Innocents it is outsider Mathilde (Lou de Laâge) who must penetrate a secluded and secretive convent in order to save the nuns inside. The action begins inside the convent as the nuns prepare for prayer. Little is said, but we infer that something is amiss from the fear and unease etched on faces.

A single sister sneaks out of the building and finds her way to a makeshift French Red Cross hospital, where after battling some initial reluctance she convinces nurse Mathilde to return with her. Impalpable tension and murky conspiracy is expertly maintained by Fontaine, who drip-feeds information, taking her time to reveal the horrific truth: that the convent was brutally overrun, first by German and then Soviet soldiers, and that several of the nuns are pregnant after being raped. But this is no get in, get out, job done scenario. The nuns, bound by a vow of chastity, do not want the community to know of their “indiscretion”, so Mathilde must deliver the children in secret. Further complicating matters, most of them consider it sinful to be undressed and touched by anyone, even by another woman.

They are spurred on in their saintly irrationality by their frighteningly dogmatic mother superior (Agata Kulesza), whose rigid beliefs lead to all kinds of moral morasses. Among the greatest pleasures in The Innocents are the fierce philosophical and theological debates, reminiscent of Bergman at his best. Fontaine confronts us with numerous questions: are the nuns’ pregnancies immoral because their vows of chastity have been violated, or moral because God cherishes all new life? Is religion simply about maintaining the appearance of piety to the community, or about actually being good? How can God exist alongside a world of such cruelty and agony?

As a communist and probable atheist Mathilde’s arrival on the scene adds impetus. Also reminiscent of Bergmann are the crisp, austere visual style and sound design that vividly conjure the sublime yet agitated atmosphere, while several stunning close-ups of women’s faces appear to be an homage to the Swedish master’s iconic Persona. The sparseness and harshness of The Innocents‘ sound design mean that every whisper, sigh, scream and surgical procedure is intensely felt. The combination of light and shadow, while initially Caravaggesque, gradually comes to resemble Vermeer as Mathilde’s presence improves the nuns’ collective mood. The music, scored by Grégoire Hetzel, used sparingly, is affecting. Lou de Laâge is convincing as the lonely introvert who finds a home of sorts in the convent, while all of the nuns perform their roles competently, especially Agata Kulesza’s sinister mother superior.

The weakest link is Mathilde’s Red Cross colleague Samuel (Vincent Macaigne), whose largely unexplored Holocaust backstory is an unnecessary addition to an already heavy story, and whose deadpan acting style doesn’t quite fit. There are also one or two sections – where different nuns giving birth seems to be all that happens – in which the film drags slightly, but this is soon forgotten in its gripping final third. The Innocents is a masterful interpretation of real historical events that has just the right touch in dealing with such sensitive subject matter. Its ability to simultaneously interrogate – without simplifying – the themes of religiosity, sexual violence, pregnancy and the female relationship to the body, mean it is full of relevance to the moral debates of our own century.