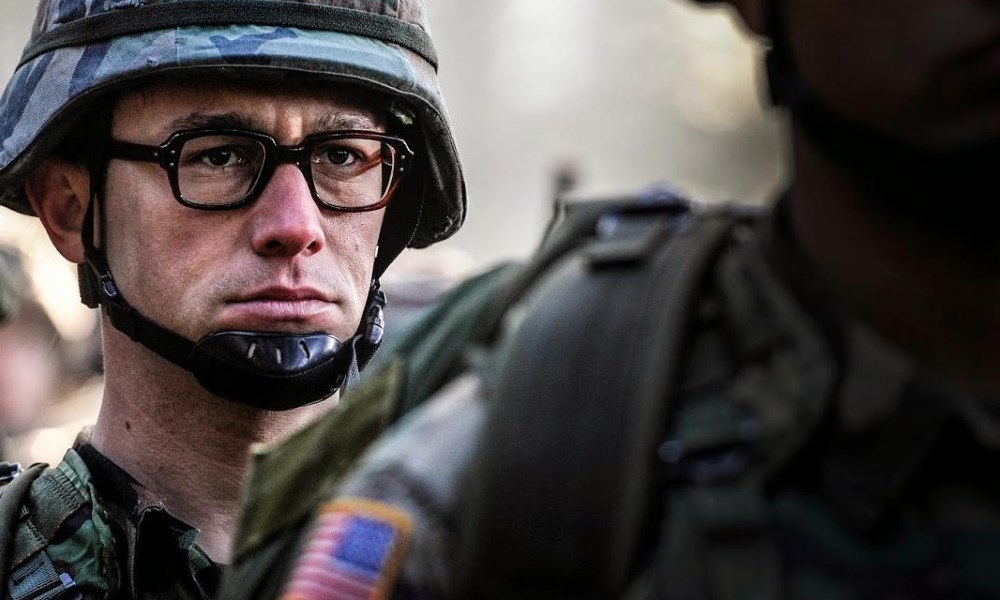 It’s hardly a surprise that Oliver Stone would want to make Snowden. He’s always been a filmmaker with a political conscience and his recent comments on Pokémon Go would suggest a healthy distrust of the surveillance state. It’s a shame then that his political thriller about Edward Snowden, based on The Snowden Files by Luke Harding and Time of the Octopus by Anatoly Kucherena, is a clunky and turgid affair, albeit one with a few bizarre moments thrown into the mix to keep audiences on their toes.

Stone’s intent is clearly a polemic and the complex politics are portrayed in perhaps necessarily reductive fashion in order to frame Snowden (Joseph Gordon-Levitt) not just as protagonist but as hero. At times, the realities of the situation threaten to get in the way, like when Ed’s willing descent deeper into the blanket surveillance rabbit hole seems at odds with the caricature of the government as moustache-twirling evildoers. Presumably this is what Joseph Campbell would call ‘the belly of the whale’ moment in Ed’s story, when he is consumed by opposing forces. It’s relevant here because the script takes pains to remind us of Ed’s affinity with the mythic heroic cycle when he name-checks Campbell in his CIA interview. There’s also time to mention Ayn Rand and quote Atlas Shrugged.

Stone projects his antagonist’s face onto a wall-sized screen during a tense Skype conversation, framing Ed in silhouette against the enormous looming face of Rhys Ifans’ CIA boss, O’Brian – it’s like a superhero is receiving a city-threatening message from a maniacal super villain. There are a few moment of exaggerated genre cinema thrown into their film that is otherwise at pains to remain serious, including an instant of noir pastiche as Snowden stands bathed in red light in his Hong Kong hotel room window ominously telling doc filmmaker Laura Poitras (Melissa Leo) “I was wrong”.

Gordon-Levitt is perfectly fine as Snowden, getting the voice and cadence fairly spot on and he looks almost right. The problem is that he’s such an introvert and blank slate – that’s pretty good for espionage but not especially compelling for a character arc. Shailene Woodley gets to be more expressive as his girlfriend, Lindsay, but it’s hardly a role she can sink her teeth into. Their relationship is another element to get the genre treatment with certain scenes resembling Nicholas Spark’s romances but others are tenderly observed even if their chemistry feels mostly non-existent. It is likewise difficult to make computer programming cinematically lively and Snowden struggles in a similar way to Alex Gibney’s Zero Days, with most of Stone’s visual flourishes feeling forced.

There is a nice sequence towards the end – the one in which our hero removes the infamous files from his workplace – and some unspoken camaraderie from Snowden’s programmer colleagues but it all get fluffed by a Piers Morgan cameo and Peter Gabriel’s unexpected Snowden-inspired song The Veil over the ending credits. In a film about something this important, the fact that these moments are the most memorable speaks volumes; for a far more urgent account of the same thing, the documentary that the aforementioned Poitras was shooting in that hotel room – Citizenfour – is the way to go.