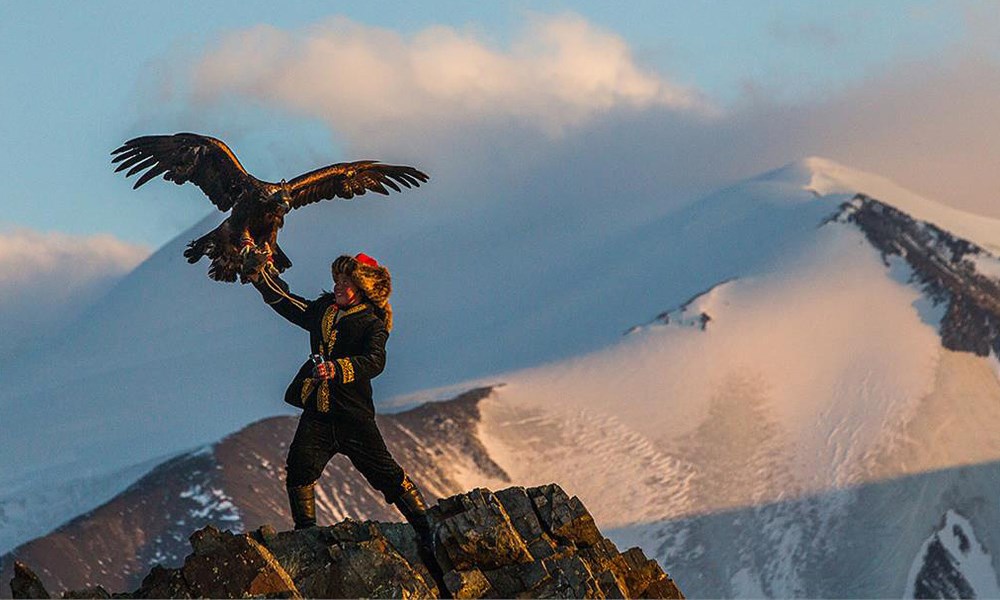 Through a symbiosis of sound, image and storytelling, a film’s ability to transport a viewer to a time and place far removed from the comfort of a darkened theatre in just a matter of seconds is where the real magic of cinema lies. From it’s very opening frames, and the crash of a giant cymbal, Otto Bell’s The Eagle Huntress is a wondrously beautiful and beguiling journey into the unknown and a documentary of simultaneously mythic and very modern proportions. Tales of man and beast – and more specifically to this case child and beloved bird – are commonplace in the movies but the relationship of Mongolian girl Aisholpan and her eagle is as unusual and enchanting as they come.

On the one hand, The Eagle Huntress is soul-enriching in a vibrant, life-affirming, Disney-esque manner but in smashing historical gender conventions through her actions, there is a realist bite and plenty to chew on here that – importantly – will be accessible and instructive to female audiences of all ages. At thirteen, not too many young women approach their adolescence concerned about training an eagle to hunt and compete in a world famous tournament but Aisholpan is determined to follow in the footsteps of her ancestors – even if she is a girl.
“Girls do not hunt,” say leathery-faced elders, disgruntled at the prospect of upsetting the centuries-old apple cart. With rosy cheeks and a smile as broad as the vast valley plains of the Altai mountains where she lives in astonishing isolation with her family, it is impossible not to be charmed by Aisholpan’s infectious determination, positivity and astonishing fearlessness. In the face of seemingly unanimous dissenting voices, the unerring support, progressive thinking and unbounded admiration of Aisholpan’s father is further fuel to warm cockles against the bracing cold of bitter conditions both literal and figurative.
A prologue in which a lamb is sacrificed for an eagle he is to release back into the wild after the traditional seven year cycle of life demonstrates the kind of brutal harmony to man’s co-existence with nature here. However, the morality of this becomes questionable when Aisholpan is to seize her first eaglet fresh from a nest. There is no suggestion from Daisy Ridley’s sporadic narration that this act constitutes poaching but to the uninitiated there is something very uncomfortable in seeing an infant wrenched from its mother.
Nevertheless, in seeing the careful training of her new pal and in preparing for the main event, we become deeply invested in this plight. Putting her skills truly to the test in the wild, prey to the perilous conditions, Aisholpan’s bravery and remarkably intrepid spirit further shines through in the film’s latter stages. Spectacular visuals and a female story of real substance and significance make The Eagle Huntress a soaring success.
Matthew Anderson | @behind_theseens
Facebook
Twitter
Pinterest
LinkedIn