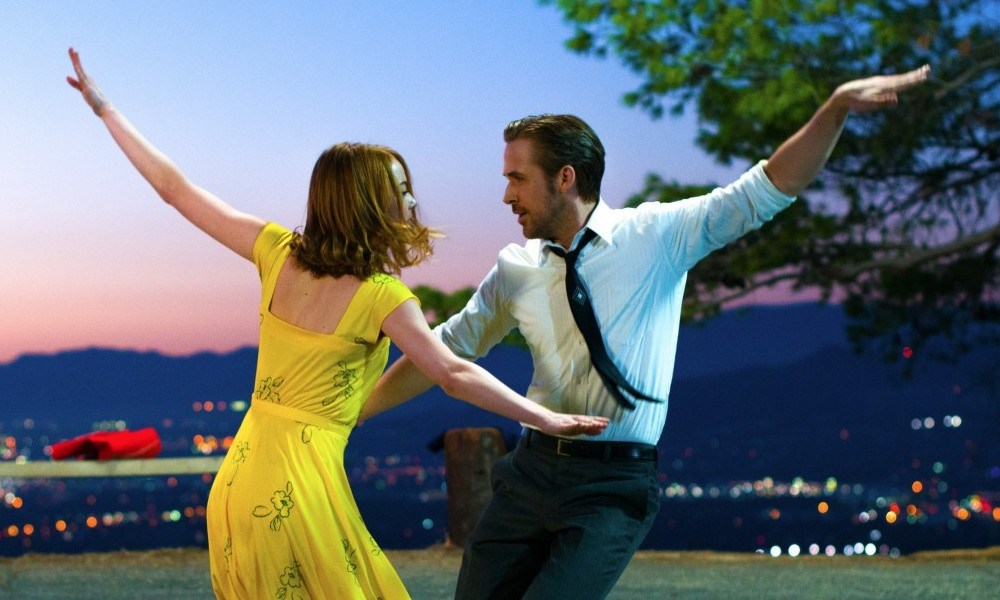 “Why do you say romantic like it’s a dirty word?” Seb (Ryan Gosling) a struggling jazz pianist asks barista and wannabe actor Mia (Emma Stone) as they stand on the Warner Bros back-lot considering their respective futures. Damien Chazelle’s follow-up to the award-winning Whiplash is whip-smart, full-on movie nostalgia at its best and despite all its longing for the past, La La Land feels like a breath of fresh air. When was the last time there was an original movie musical as opposed to a Broadway adaptation? From the opening sequence, Chazelle boldly states his case, hits his marks and gets going.

A traffic jam is usually not a good thing at the beginning of a movie – think of Godard’s Weekend or 8 ½ or Falling Down – but here it is the opportunity for a truly thrilling song and dance routine on a four lane overpass. Here Seb and Mia almost meet for the first time in the gridlock. In the time-honoured fashion of great movie romances, they almost meet a number of times, as Mia lives her life of tragi-comic auditions and parties where everyone is looking to be seen, working in the coffee shop and sleeping beneath her household goddess, Ingrid Bergman. Seb’s dreams are already torn at the edges as his first attempt at a jazz club is now a samba and tapas bar: “choose one!” he exclaims exasperated. His puritanism is getting him nowhere fast.

Reduced to playing 1980s nostalgia pop at pool parties, Seb and Mia meet again and a romance begins with a soft shoe shuffle in front of the LA skyline at dusk, even as they sing about how there is no spark, the sparks begin to fly. Framed by the seasons – the joke is that in LA they all look the same – the romance follows a trajectory parallel to their dreams as they each encourage the other to grow and become what they always wanted to be. Seb is inspired to get his life together and Mia to begin writing her own one-woman play. The course of true love cannot obviously run smooth and as they both find modicums of success they also begin to drift towards crisis. Chazelle’s writing is sharp and witty, with plenty of knowing in-jokes, including some beauties about the limits or otherwise of nostalgia – and so the film’s appeal.

Although inhabiting totally different genres, Chazelle’s obvious love of movies and music makes this more than a little like a Tarantino film, swapping songs instead of guns and tap dances in the place of Mexican stand-offs. But for all its postmodern smarts, La La Land has a heart as big as its Cinemascope screen. This is primarily down to the two leads, without their performances it would only be an empty, if impressive, exercise in dizzying technical skill and style. Their song and dance skills are never going to make Fred Astaire sweat, or Adele worry about getting a day job, but Ryan Gosling has a nice Chet Baker little boy lost phrasing and Emma Stone likewise a great set of pipes – anyway what do you expect? She’s an actor, he’s a pianist. And Chazelle’s camera is such a great dance partner, they both look great when they have to move.

The magic takes other frequently and whole sequences tell the story without lyrics, just music and movement and magic and imagination. Jazz, in other words. More importantly, they have real passion and chemistry. You care that they’re together. They’re as fizzy as the old style champagne cocktails which glide diagonally across the screen to represent ‘good times’. Just as Gladiator dusted off the sword and sandal epic, so La La Land reinvents the Hollywood movie musical for a new age. It’s an oft-stated theory that the original musicals burst onto the scene during the depression, giving some much needed colour and joy to life. In our current world of terrorism and Trumpian insanity, we can do with some of that Technicolor escapism and it doesn’t come much better than this.