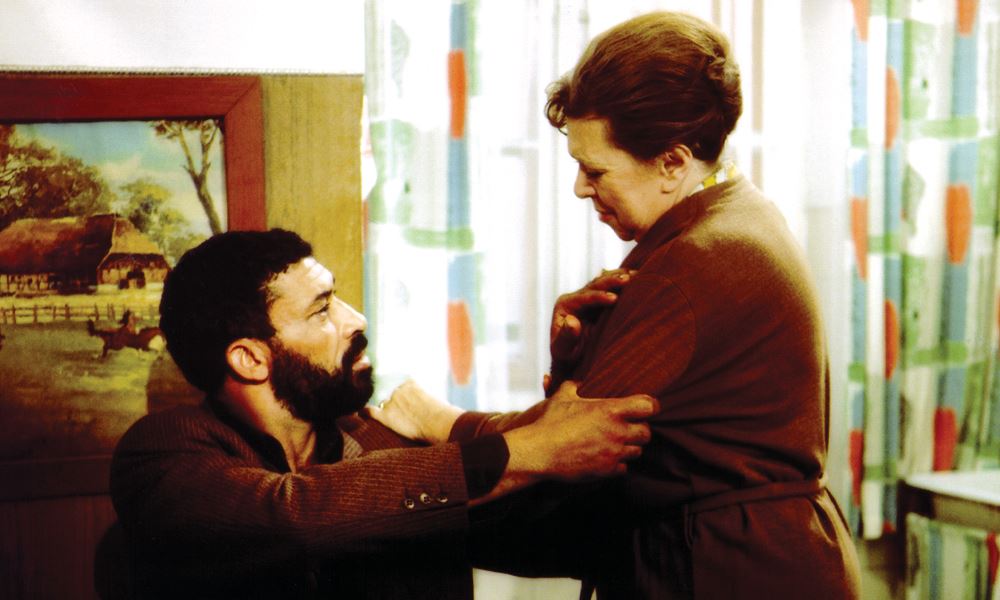 It’s surely the sheer, unvarnished humanity on display in Rainer Werner Fassbinder’s celebrated Ali: Fear Eats the Soul that’s the film’s greatest success. When the eponymous Ali (El Hedi ben Salem), a Moroccan immigrant in his late thirties, meets nervous 60-year-old Emmi (Brigitte Mira) one evening when she steps into a bar to get out of the rain, his friends challenge Ali to ask her to dance. Ali does indeed dance with her, before walking her home and going to bed with her.

An unlikely romance blossoms, made all the more charming by the combination of Ali’s simple but direct grasp of German – “Your coffee always good” – and Emmi’s disbelief at her good fortune that a man twenty years her junior has fallen in love with her. Unsurprisingly, their innocent happiness does not last long as they incur the ire of relatives and friends doubly disgusted at the age difference and the fact that Ali is North African. Indeed, Fassbinder’s skill as director is never more evident than in his quiet compositions, which increasingly separate Ali and Emmi from the other characters on screen. Typically for Fassbinder, Fear Eats the Soul presents a simple story light on incident but heavy on emotion: Emmi’s plaintive cries to slack-jawed onlookers in a park, “That is my husband!”, are devastating in their fury.

Shot amongst a sea of yellow park furniture the imagery is at once gorgeous and banally melancholy and arguably the key emotional moment of the film: a narrative linchpin that signifies breaking points for both Emmi and Ali. After the park scene, the couple are more warmly received than previously, but it comes at a cost, as both Emmi and Ali objectify each other for the fairweather approval of their peers. Inviting her friends into their flat, Emmi parades Ali in front of them, encouraging them to touch his skin and feel his muscles like a prize horse, while they remark with mean surprise at how clean he is. Such is Fassbinder’s skill at casting Emmi as much as a victim as Ali that her racist complicity is horribly understandable.

Ali reacts by leaving the flat to find himself in bed with a younger woman and when Emmi comes to his garage to beg him to come home, allows his workmates to humiliate her with jokes about her age. Both are given an impossible choice – having forever to decide between society and each other – neither one nor the other being truly possible. Even Ali’s solution, “Best not to think”, doesn’t work, resulting in an ulcer that hospitalises him just as Emmi and Ali reconcile, denying them and the audience a satisfying resolution. As with all Fassbinder’s films, Fear Eats the Soul refuses to offer easy answers, preferring its audience to dwell on the gnawing dread that Emmi and Ali must endure: this is filmmaking at its rawest.