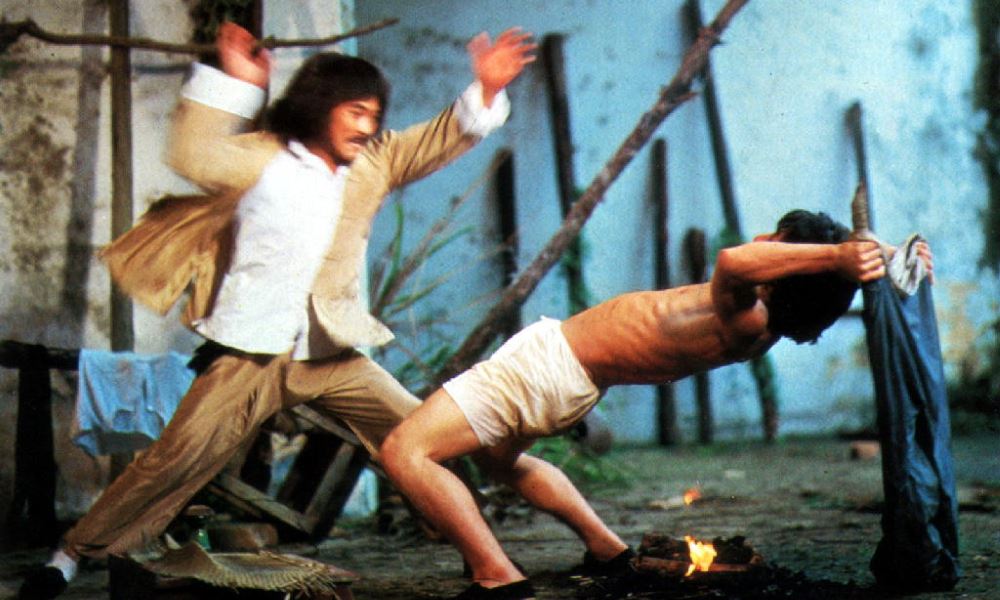 Amongst the Rush Hours and the Spies Next Door of his latter-day career, it’s easy to forget that Jackie Chan was once the rightful successor to the screen’s greatest martial artist, Bruce Lee. Eureka’s new release of the 1978 Drunken Master, one of Chan’s earliest and best pictures, is a sure-fire reminder of his status as cinema’s prince of kung fu. Where Lee’s classic films were semi-serious affairs, typically combining crime, intrigue and philosophy, Chan’s modus operandi has always been comedy, with Drunken Master more slapstick than fist of fury.

Chan plays the real-life nineteenth-century martial artist Wong Fei-Hung, who here spends his days pranking his kung fu instructor and showing of to his friends. On paper, there’s little to like about the feckless Fei-Hung, but Chan invests a typically guileless charm to the role, making his Fei-Hung almost sympathetic as he ducks out of huge restaurant bills, cuts corners in his training and generally acts the clown. After humiliating the son of a rich noble, Fei-Hung’s father sends him to train with the notorious kung fu master Beggar So (Siu Tin Yuen), whose brutal reputation marginally precedes his heavy drinking.
After a fracas in a restaurant, the drunken beggar reveals himself, Yoda-style, as the Master So, who promises to train Fei-Hung for a year. Meanwhile, the terrifying contract killer Yim Tit-sam (Jang Lee Hwang) is hired by a rival of Fei-Hung’s father to dispose of him. But given Fei-Hung’s clownish antics – and a humiliating early encounter with Tit-sam – it’s doubtful whether he’ll ever be able to ascend to true kung fu mastery. Despite the high-stakes, Drunken Master is in no hurry to get to its destination, the plot languorously winding through a series of loosely connected vignettes. At nearly two hours, the film’s charm wears thin in parts, and Chan’s gurning is only funny for so long.
But the film’s longueurs are easily forgivable when set next to such captivating martial arts choreography. Drunken Master was directed by Yuen Woo-Ping – who would later choreograph The Matrix‘s fight sequences – so it’s no surprise that the action here is good, but the unparallelled balletic skill of Chan and his co-stars is simply astonishing. Even Beggar So jokes that Fei-Hung’s kung fu is more like dancing than fighting, but when the steps are this beautiful, who’s to complain? The final kung fu sequence is as elaborate and lengthy as one might expect.
As Fei-Hung fights Yim Tit-sam with the styles of the eight drunken gods, it’s a comedy-action bit that is easily as thrilling and stylish as if it were played straight. It’s true that some of the film’s comedy is a little broad, and the film’s laconic plot is baggy compared to the pacey intrigue of your typical Bruce Lee flick, but there’s no denying Chan’s charm as a performer, nor the beauty of the astonishing skill captured by Woo-Ping’s camera. Funny, exciting, and a little too long, Drunken Master is as charming as it is unbalanced, but its martial arts choreography remains unmatched.