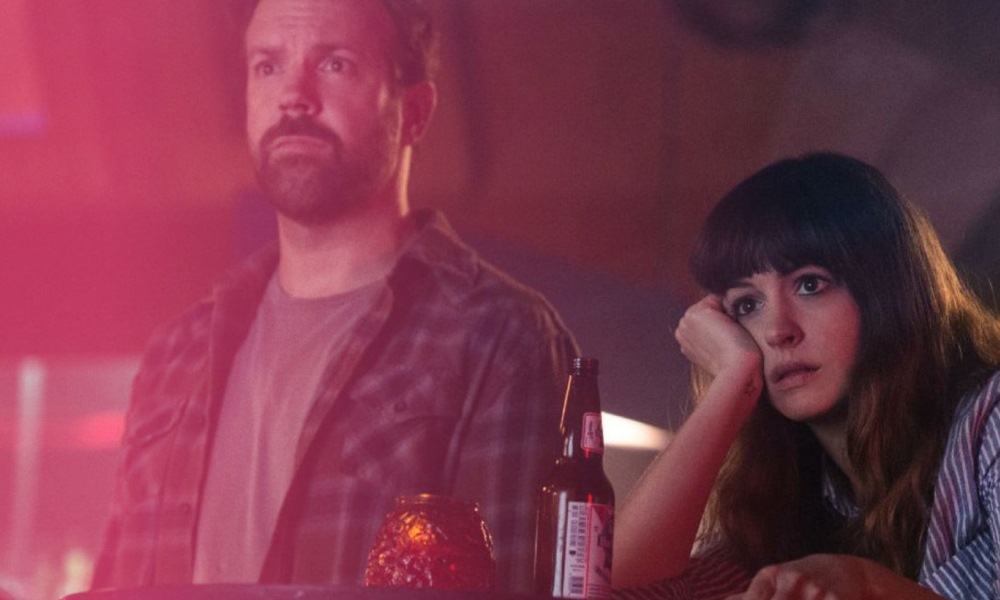 Some films manage to generate a sense of grandeur on a shoestring budget, whilst others somehow feel like indie flicks no matter how much money is thrown at them. In the case of Nacho Vigalondo’s Colossal, there’s a strange mix of both post-viewing impressions.

Colossal is one part indie slacker romp, one part Kaijū monster battle: it makes for a distinctive finished product, an easy watch driven by an overriding sense of curiosity as to where it’s all headed. Although in the end the viewer may leave feeling like they’ve watched two films superimposed a little too arbitrarily. The story concerns Gloria (Anne Hathaway), an unemployed writer who has to quit New York and move back to her hometown when boyfriend Tim (Dan Stevens) grows tired of her burgeoning alcoholism. Upon return, she reconnects with old school friend Oscar (Jason Sudeikis) and even finds work at his bar – keeping up her prodigious drinking habit thanks to late-night lock-ins with Oscar and his colourful regulars. Things take a strange turn, however, when Anne discovers that a giant Godzilla-like monster ravaging Seoul is somehow connected to her personal movements and behaviour.

In terms of its fundamental storyline, the film covers similar territory to Garden State, with a dash more of the Kevin Smith or Judd Apatow variety of easy-going slackerdom. The Kaijū element most certainly adds another dimension of intrigue, but what really keeps the gears spinning is the sense of pathos and uncertainty which surrounds Oscar’s relationship with Gloria. Jason Sudeikis is particularly good in portraying a character whose closed-up masculinity begins to betray a slightly more embittered nature than we first realise.
It’s difficult not to admire Colossal for its ambition. The film deserves praise for attempting to mix elements of a conventional love triangle drama with a mature slacker comedy and, of course, an East Asian monster battle. Its greatest problem, however, is the sense of arbitrariness that surrounds that final ingredient. Colossal possesses some real depth in its acting and its description of human relationships, it’s just a shame that when it sinks a few beers and gets up to do the monster mash: things get a little too silly.