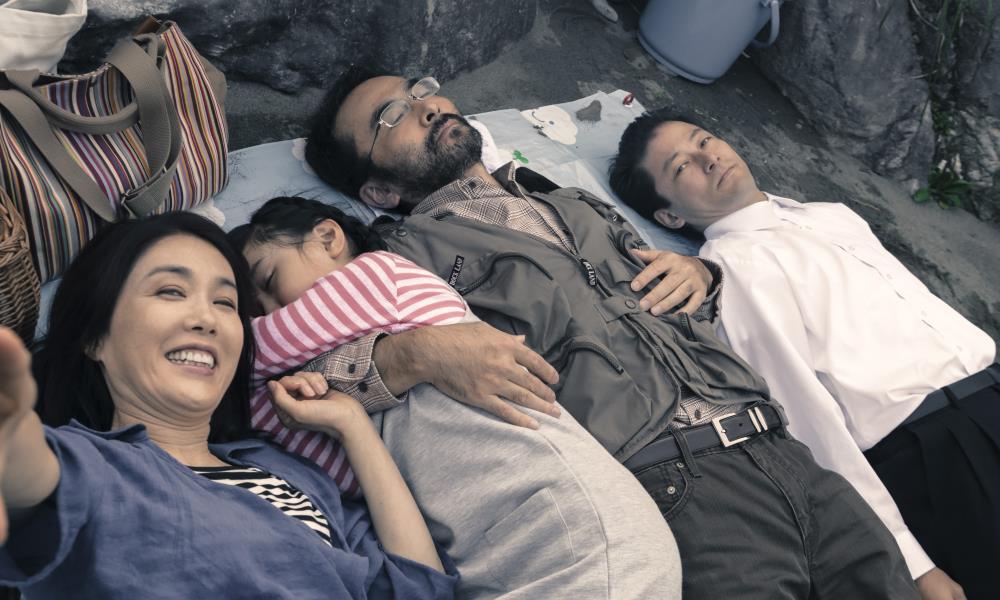 Toshio hires his old friend Yasaka (Tadanobu Asano) at his workshop, helping him out as he has just been released from jail. The quiet, perpetually white-shirted Yasaka is a little odd, but quickly bonds with Toshio’s energetic daughter Hotaru (Momone Shinokawa), teaching her to play the titular harmonium. Initially wary of Yasaka, wife Akié (Mariko Tsutsui) gradually warms to him. As he gains her trust, he confesses that the crime for which he was imprisoned was murder. An early scene in which he explains over dinner the key mistakes he made that led him to kill is intimate and compelling, and a warning that Akié may be growing a little too close to her husband’s friend.
Indeed, it’s not long before they are sharing even more intimate moments together, complicated by the revelation that Toshio may have also been involved in Yasaka’s old crime. In one chilling scene at a family outing, Yasaka lies motionless and impassive next to a napping Toshio as a carefree Akié takes a selfie, Yasaka’s sinister intent hidden in plain sight. That intent ultimately comes to fruition when he tries to rape Akié, before attacking Hotaru and fleeing the scene. Eight years later, the once-vital Hotaru has suffered severe brain damage. Toshio and Akié are on the verge of breakdown, Akié straining under the burden of caring for Hotaru, while Toshio is obsessed with finding Yasaka. Much of the charm of the film’s first half is replaced with a downbeat tone that captures the frayed tension between Toshio and Akié, suggesting that their fugue is the consequence of the poison rising from Toshio’s past. Enter Takashi (Taiga), an enthusiastic, callow youngster with some revelations of his own.
The youthful Takashi complicates the theme of complicity – he and Hotaru are the innocents in this morality play, but the sins of the father are invariably paid for by the child, with Takashi’s own unwitting quest for redemption leading him to a dark fate. If Harmonium falters, it’s in the final act, where the nastiness bubbling under the surface overwhelms the film’s tone with a finale that is nothing if not devastating. Nevertheless, Harmonium remains a deeply affecting narrative of guilt, consequence and failed redemption.