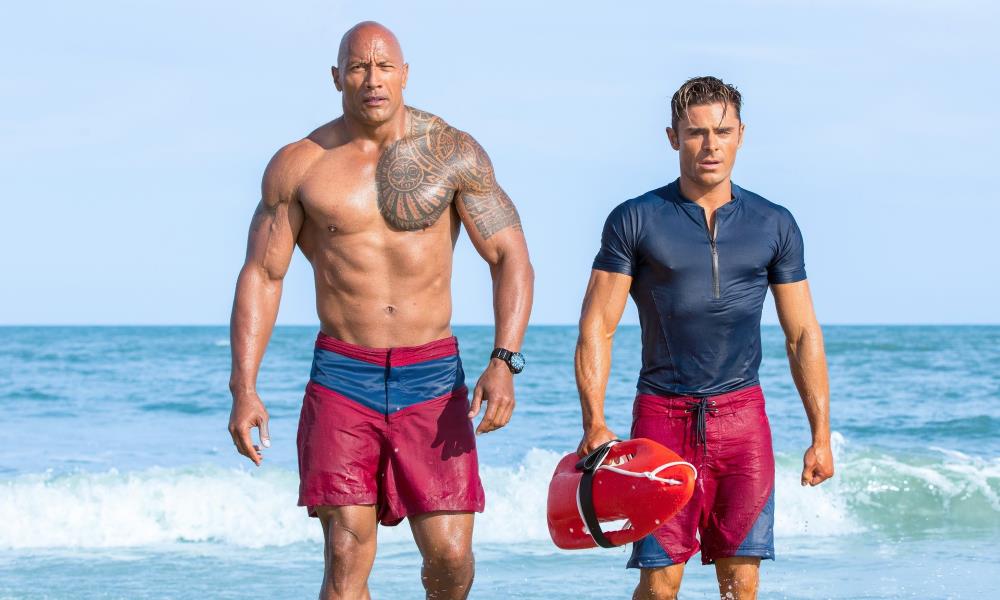 Seth Gordon remakes the cult TV phenomenon Baywatch, about a team of lifeguards who patrol the beaches of Los Angeles County that propelled its stars Pamela Anderson and David Hasselhoff to international fame, while winning fans for its tongue-in-cheek humour.

Instead of Anderson and Hasselhoff, who both pop up in brief cameos, this version stars Dwayne “The Rock” Johnson and Zac Efron, both of whom deserve more than the sleazy humour and nonsense plotting that the film delivers. Johnson stars as Mitch Buchannon, the head lifeguard who’s achieved legendary status amongst the locals for his dedication to his service. It’s with reluctance, then, that he hires Matt Brody (Efron), a former Olympic champion who’s lost his way after embarrassing himself in front of the world – something that’s been cemented thanks to YouTube. Matt risks the team’s reputation and funding with his careless approach to lifesaving.

However, when drugs are discovered on the beach, Mitch suspects that it’s somehow linked to Victoria Leeds (Priyanka Chopra), a property tycoon who’s attempting to buy up the entire beach front for her own ventures. The only way to stop her is to put their differences aside, then ensuring the safety of the residents of Los Angeles County. As written by screenwriters Damian Shannon and Mark Swift, this remake is as dumb as they come. The plot – or attempt at one thereof – is paper-thin at most, stretched out to within an inch of its life. It’s filled out with crass humour and terrible SFX that don’t make sense considering the films near $70M price tag.

As always, it’s fun to watch Johnson (ahem). He’s as charismatic as ever, and the few chuckles that do come are from Mitch’s constant ribbing of Matt’s looks, comparing him to the likes of the Jonas Brother and Justin Bieber for his good looks and dumb attitude. Efron, however, doesn’t quite fit in the role of Matt. He’s exhibited his ability to perform before, but here his lines land with a thud and his performance doesn’t equate too much more than flashing his abs in the hopes this will distract the audience enough. There are woman in the film, too, but none of the three main leads – Alexandra Daddario, included, who can do much better – are limited in what they have to work with, the camera lingering on them in swim suits as much as possible, or reducing them to merely staring in awe at their male counterparts.

It’s a shame, because the likes of 21 Jump Street proved that there’s a way to rework cult TV series in a way that hits the sweet spot with current audiences and revitalising what was once a much-watched series. Unfortunately, that isn’t the case for Baywatch. What the director and writers have done is turn something that’s considered by many to be dumb-but-fun into an overlong, unfunny film that’s just plain dumb.