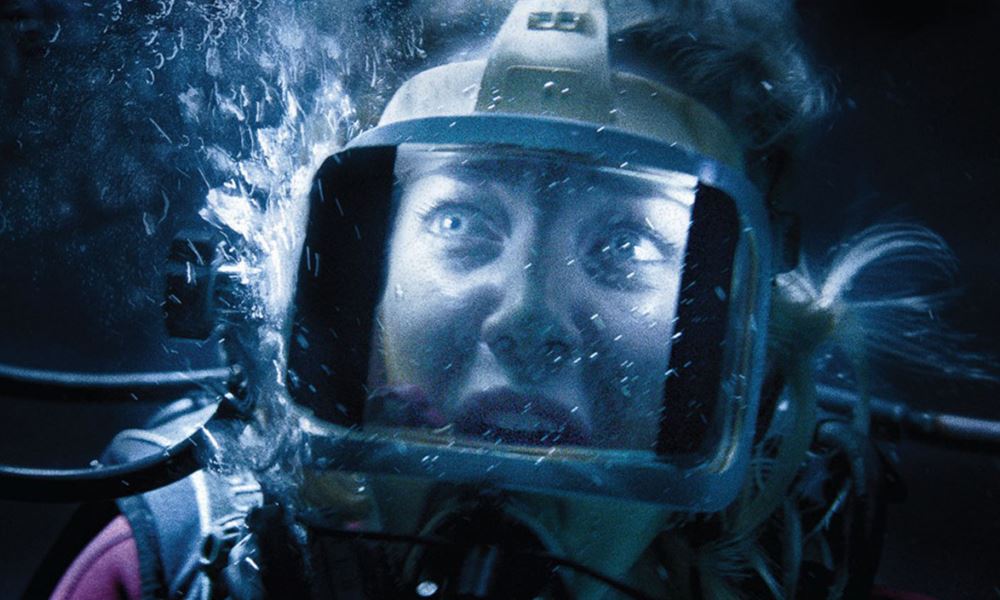 Lisa (Mandy Moore) has just been dumped by her boyfriend for being too boring. To prove him wrong, Lisa goes on holiday to Mexico with her sister, Kate (Claire Holt). Kate convinces Lisa she needs an adventure, in the form of cage diving with sharks, through a sketchy company run by two dudes they met at a bar.

In the grand cinematic tradition of Idiots Trapped in a Confined Space – see also 127 Hours, Buried – the girls’ hubris means that things do go wrong. After the cage’s rusty winch snaps, the sisters find themselves stuck almost fifty metres below the surface with a dwindling air supply and hungry sharks overhead. Just out of radio-range of their boat, Lisa and Kate must use their limited resources to escape their marine misadventure.

As sure as death and taxes, any film about sharks must pay homage to Jaws – here director Johannes Roberts does so with an opening swimming pool gag and title font cribbed directly from the 1975 film. That’s where the similarities end, though – 47 Meters Down’s shallow characterisation is no match for Spielberg’s classic, and the supporting cast, including a salty Matthew Modine, fail to make a splash. Indeed, the screenplay, penned by Roberts and collaborator Ernest Riera, is the very definition of perfunctory, no more than an assemblage of exposition and contrivance existing solely to ferry characters from one perilous scenario to the next.

Nevertheless, the contrivances do their job and at 87 minutes, the film rattles along at a snappy pace. Though most of the picture is surprisingly bloodless – the inevitable munching happening largely off-screen – Roberts maintains a consistent sense of peril by smartly keeping the toothy menaces out of sight, hidden in the murky depths. Mark Silk’s cinematography, too, is effective. The dim lighting and use of close ups create an all-important claustrophobia, though one which sacrifices cohesive editing and visual clarity. An over-reliance of jump scares scales back any genuine tension, though at least they are largely well staged.

Early shots of fake-looking schooling fish raise CGI alarm bells, but the marauding Great Whites themselves look consistently convincing, even if their behaviour is not. Despite establishing that sharks attack from below, the film regularly has the beasts menacing the sisters as they hide on the sea bed and in caves, and someone really should have told the writers that sharks – as every fan of Deep Blue Sea knows – can’t swim backwards. These moments of scientific infidelity are forgivable – this is horror, after all – less so the numerous shots of shark-baiting wounds that never seem to actually bait the sharks.

The finale, a thrilling dash to the surface punctuated by a terrific flare-illuminated money shot, is undercut somewhat by a muddled, indecisive ending. Nevertheless, overall the film’s trashy pleasures just about keep it afloat. Among shark movies, Roberts’ effort is more dogfish than monster of the deep, invariably drawing unfavourable comparisons to last year’s The Shallows. Yet as diverting, if slightly naff, entertainment, 47 Meters Down has just enough bite to sustain itself.