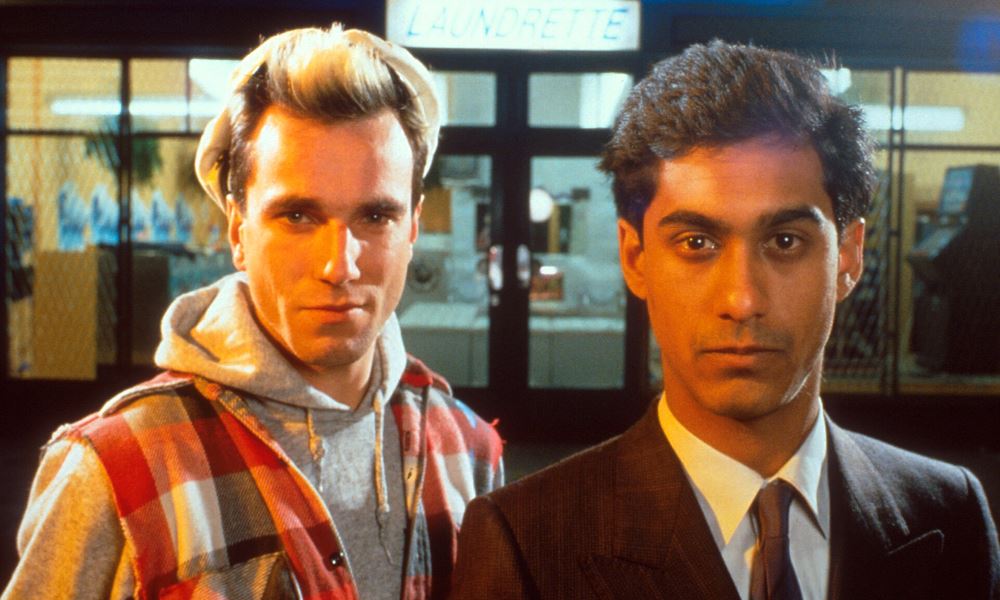 An Asian gentleman boisterously raising a glass to “this damn country, which we love and hate” perfectly encapsulates the conflicted nature of the immigrant experience in Stephen Frears’ wry take on capitalist-era London through the prism of first generation British Pakistanis.

The third feature from the hugely prolific Frears (and the first of Working Title’s increasingly iconic production slate), My Beautiful Laundrette is often heralded, alongside the likes of Rita, Sue and Bob Too, as the quintessential glimpse into 1980s Thatcherism. Despite the sometimes rough around the edges nature of the film, it remains very much a fine and illuminating societal snapshot of that time. Referred to as ‘Omo’ by his friends in the know, Omar (Gordon Warnecke) is a young gay Pakistani who lives with his defeated, vodka-sodden father Hussein (Roshan Seth), whose own career success as a younger man in Bombay has eluded him over in the UK.

The same isn’t true of his brother, Nasser (the late, great Saeed Jaffrey) a prosperous business man who has assimilated much easier into British culture, lavishing his cash around and frequently hitting the high-end wine bars with his white mistress in tow. In an attempt to emulate his uncle’s success, Omar manages to get the funding together to turn a grotty laundrette into a sparkling coin op paradise. It’s around this time that an old school acquaintance Johnny (Daniel Day-Lewis) – with whom Omar was deeply infatuated with – reappears on the scene, having ditched his fascist past. The two instantly reignite their passion for each other and Johnny takes an active hand in helping Omar realise this dream of a washing utopia.

Perhaps inevitably, in the three-plus decades since the film first burst onto the scene, some elements haven’t aged particularly well. Frears’ sometimes ramshackle framing and compositions jar (although this may stem from the film being initially conceived and shot for TV), and Warnecke’s strengths as an actor are often limited, particularly when he’s performing with Day-Lewis. It’s a star-making turn from the young actor and the now celebrated chameleon-like ability he has in wholly assuming his character’s identity is also evident here.

It’s the committed turn from Day-Lewis and Hanif Kureishi’s socially-astute, Oscar-nominated screenplay that manages to compensate for the film’s technical shortcomings, alongside the (then) landmark casual representation of a gay relationship on screen – something which undoubtedly had the conservative masses up in arms over during the film’s initial release. It’s that warm, often messy, romance which casts an endearing, shimmering light across the otherwise grim South West London milieu of that era. It’s only a shame the disc’s flimsy supporting material – an unremarkable collection of archival Q&As and documentaries – falls short of the kind of worthy tribute deserving of the film.