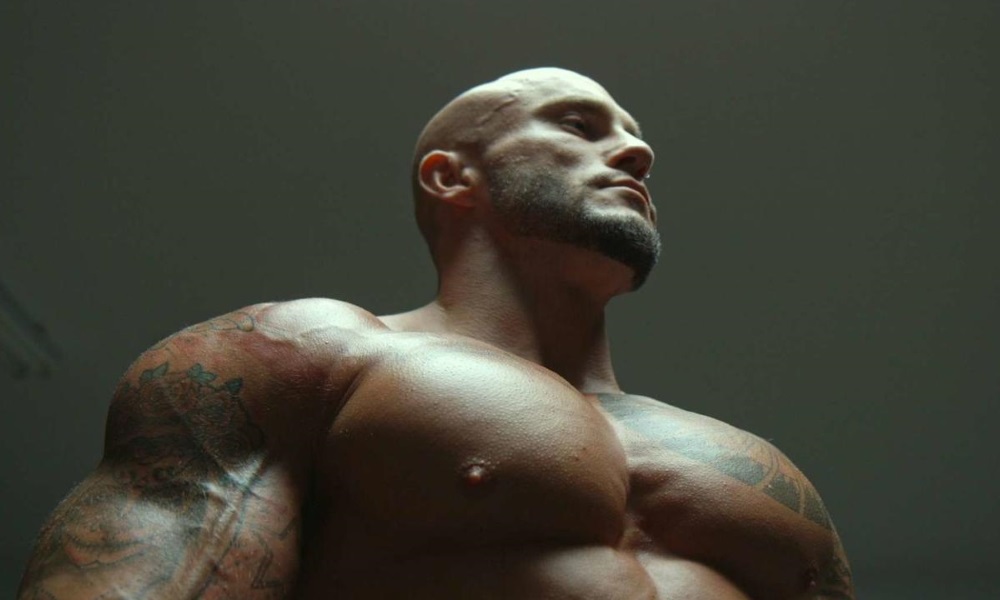 Entering the strange world of bodybuilders, Denis Côté’s documentary A Skin So Soft offers a meditative – if at times obtuse – take that is not so much Pumping Iron as Waiting for Glutes. “It can take years to get the right shape,” says one of the subjects of A Skin So Soft.

We follow six such devotees in what is ultimately an affectionate look at these men. The first man we see is Jean-François Bouchard, a hulking mass of bulge with a bald head, a ZZ Top grade beard and a passing resemblance to Mel Gibson during one of his madder phases. We see J-F work out and undergo a weird massage and depilatory session that involves medieval torture implements and looks like agony. He’s frequently silent, but as with many of the men it is unclear whether the quietness is due to editorial decisions on the part of the filmmaker or is just part of his solitary character.

In contrast, we see Ronald Yang in his home, first in his garage posing clumsily for a series of selfies and then with his family eating and discussing his training. Cédric Doyon has a funky little dog and a bunch of tattoos. In an extraordinary scene, he chows down while watching a video on his laptop. His face and muscles bulging it looks for a moment like he might be trying not to vomit. Tears spring into his eyes and it becomes clear he is in the grip of a strong emotion. But for what reason is left totally unknown. Was it a personal tragedy or was he watching the end of The Champ?

The most loquacious is Benoit Lapierre, a veteran who has retired to concentrate on training, with a mix of professional know how and New Age mumbo-jumbo. He whispers a lot about energy and memories and waves his hands around the power-points of the client’s body. Another non-bodybuilder is strongman Maxim Lemire who competes in World’s Strongest Man-style stunts like dragging a truck and occasionally wrestles. Like Bouchard, he is a morose presence and his trainer wife complains he hasn’t talked to her for two days. “Dad’s got a grumpy face,” his daughter provides the documentary with some much needed editorial commentary.

If Benoit and Bouchard are the veterans than Alexis Légaré is the novice. A young frankly quite scrawny specimen, he contends with his girlfriend who he tries to get interested in bodybuilding without much success. At least they have a common interest in that they both obviously love his body. Although there is an obvious ridiculousness to the whole business – the würstel-coloured tan, the baby oil and posing pouches – the A Skin So Soft is sympathetic to these devotees and their art. The deeply engaged narcissism and the exaggerated masculinity leads to many paradoxes, one of which is how nakedly vulnerable these men are. They look different from everyone else but whether this difference is excellence or freakishness is an open question.

Côté employs a methodical reticence that often leaves the viewer guessing as to the significance of the images we are seeing. And which also has the result of undermining any empathy we might feel. When the whole gang rent a bus and drive off for a countryside retreat, it isn’t clear if we are watching a jaunt organised by the filmmaker or a thing that these men do because they are friends. Are they friends? Do they know each other outside of the film? For all the muscle on display one could be forgiven for asking “Where’s the beef?”.