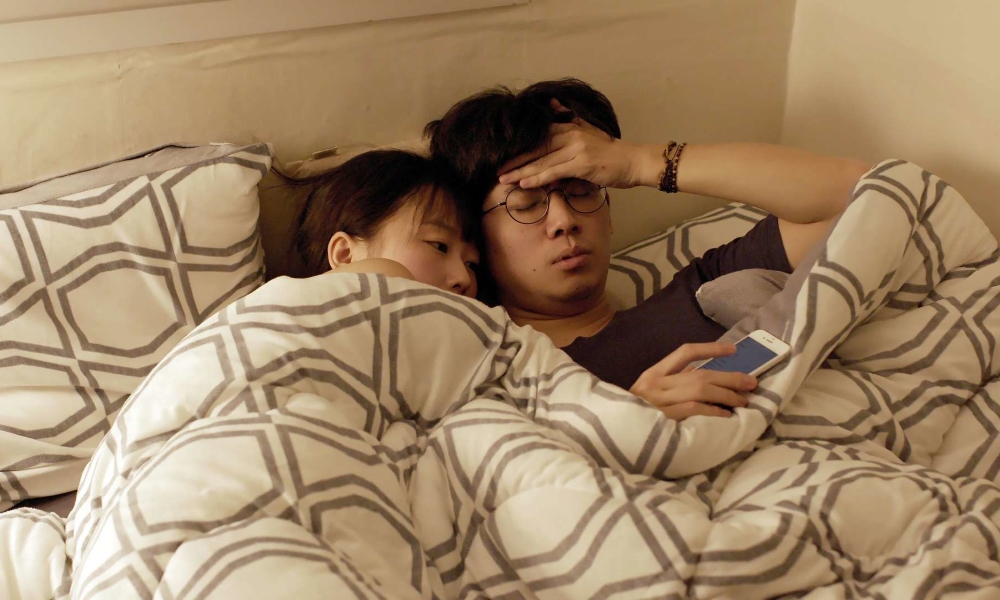 South Korea is at a crossroads, embroiled in political demonstrations and a government on the brink of falling, but for a young couple heading into maturity there are other decisions to be made, roads to be taken. Ji-young works for a TV company and living with her boyfriend Su-hyeon, a would-be artist who pays the rent with a teaching job he’ll probably not be able to give up. They’re in the middle of moving out of their apartment: everything is boxed and their eating whatever is left in the fridge. But there is a larger indecisiveness at play as well. There’s a possibility that Ji-young might be pregnant and they both realise that there’s only so much time they can spend treading water.

Structured around two family visits, The First Lap is a subtle exploration of how a relationship is defined not only by the people inside the relationship but family and social expectations, economics and class. The couple first visit Ji-young’s parents: an upper middle-class couple living in a difficult to access luxury highrise in Incheon, with a view of the golf course. Dad is affable enough, asking about work and keen to help the couple, but Ji’s mother is embarrassed by their stubborn non-relationship and bluntly tells her daughter “I can’t say I’m very proud of you”. Following an interlude in which we learn that Su-hyeon’s ambitions to be an artist are not accompanied by any real drive, we head across the mountains to the east coast of the country and the port city of East Coast port of Samcheok, where his working class family live. Here we see another glowing advert for not getting married. Su-hyeon’s parents have separated: she is a cook and he is an alcoholic working in a cement factory. The celebration dinner for his sixtieth quickly degenerates into a boozy argument, even as Yi does her best to play the role of the dutiful presumptive daughter-in-law.

The First Lap’s strength is in entering the private space of a couple, sitting in the backseat without ever feeling like a gooseberry as the pair talk in their quiet voices, share food, console and joke with each other and literally as well as metaphorically navigate the road ahead. Their obvious comfort with each other is so attractive and yet at the same time you can see that it is not exactly sparking with passion and, given the state of their own families, it’s understandable that they don’t necessarily want to commit. Dae-hwan also creates enigmatic little omissions and edits. With the pregnancy issue still unresolved, a baby starts crying off-screen and Su-hyeon leaps up to go and comfort it – but whether this is a flash forward, a neighbour’s child they’re baby sitting or a jokey ringtone is unexplained. Likewise, at the end of a creepy story while driving across the mountains, something swoops past the windscreen. These moments always happen towards the end of a scene or even on the cut, as if the film itself doesn’t want to commit to too close a relationship with its audience.

In the end, The First Lap is a warm and human film about doubts and about navigating the world with your partner. A beautiful moment late on has the pair join a candle lit procession, protesting former President Park Geun-hye. Even here they’re not sure which way to go: as they walk against the flow of the people and then turn around and find the flow has reversed with them. The problem at the heart of the matter is that even if you decide to live like other people, you soon discover that other people don’t know what they’re doing either.