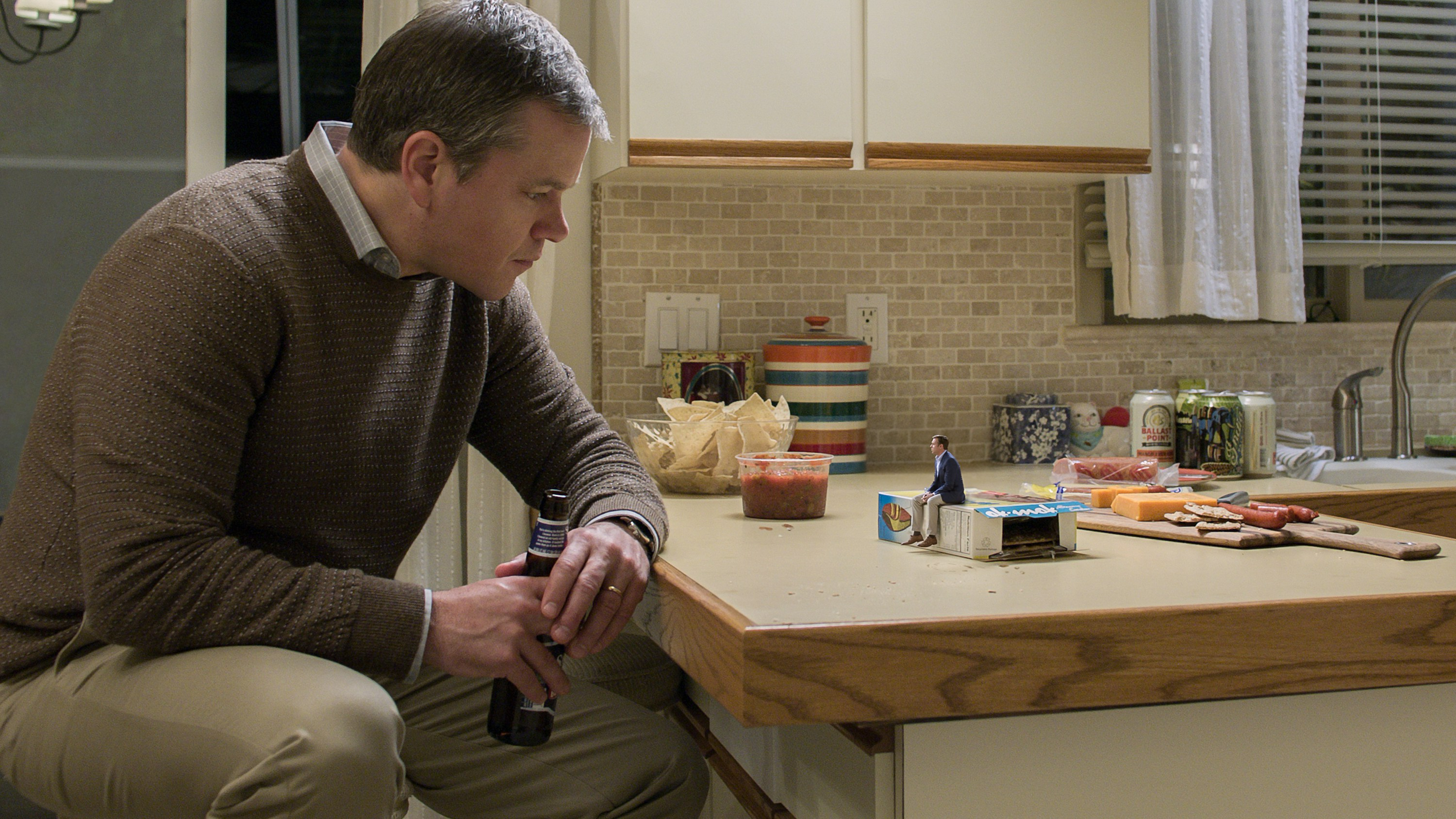 Matt Damon as Paul Safranek and Jason Sudeikis as Dave Johnson in <em>Downsizing</em> from Paramount Pictures.

Alexander Payne returns to cinemas this week with Downsizing, a surreal sci-fi comedy starring Matt Damon, Hong Chau and Kristen Wiig, which posits a revolutionary new technology that can shrink people as a way of reducing environmental damage.

Following a discovery in a Norwegian laboratory, a new drug is released which allows for the irreversible shrinking of people to a matter of centimetres. The immediate idea that the scientists have is that this will go a long way towards solving environmental problems. Smaller people produce less waste, consume less resources and simply take up less space. Their utopian dream is for the whole human race to be shrunk, and thus save the planet. Middle-aged, middle-class and middle-American couple Paul and Audrey Safranek (Damon, Wiig) slowly grow to like the idea following a school reunion which features an apparently happy shrunken former classmate (Jason Sudeikis).

It’s a dryly executed point that almost any idea will become attractive when we see someone from school doing it. The Safraneks have their money worries and career dissatisfactions, but the inciting incident is motivated by keeping up with the Sudeikises. They plan to move to Leisureland where their money – once they’ve liquidated their assets and paid for the treatment – will be converted proportionally to their size making them instant multimillionaires. The physical process is at once strangely horrifying and funny as heads, eyebrows and bodies are shaved, fillings removed and orifices irrigated.

Unfortunately, not everything goes to plan and the Disneyland daydream of never working again isn’t quite going to work out for Paul. The solution to the world’s woes – environmental and economic – and indeed those of Paul can’t be solved by retreating to a protected enclave playing tennis, living in dollhouse mansions and driving around in dinky little cars. This is Payne’s most political film since Election and refreshingly eschews the gentle social realism of Sideways and Nebraska for something much more subversive. The pointillist normalcy of those films is used well as a context in which to embed the craziness of his Kaufmanesque high concept.

Damon is perfectly cast as an average Joe, worried about shrivelled ambitions and whether or not he’s getting fat. On waking up newly shrunken, his quick peek at his privates is comically perfect and human. He’s a nice guy – as he’s told by his neighbour – but “a bit pathetic”. With co-screenwriter Jim Taylor, Payne renders his nutty idea perfectly believable. There’s a deftness to the dialogue, stuffing in sacks of ideas in just a line or something happening in the background. It’s almost as if Pixar made a live-action picture. The story bounds forward confidently through the years, with several completely unexpected turns. The environmentalism is as stark and frantic as that of Bong Joon-ho’s Okja, though Downsizing is even more pessimistic.

Paul’s political and personal education comes via a noisy Serbian playboy neighbour, played with scenery-chomping elan by a wonderful Christoph Waltz. Or, more accurately, via his cleaner Gong Jiang (Chau), a one-legged Vietnamese dissident who was shrunk by her government after she was arrested for protesting. She gives a vibrantly broad performance which – among the film’s many surprises – becomes increasingly nuanced as the story proceeds. A special mention should also go to the iconic Udo Kier, who plays off Waltz with deadpan brio – if such a thing exists. Although ten years in development, Downsizing lands perfectly as a timely antidote to Trump’s America. Ultimately, this is a film where helping other people and being empathetic are the true road to salvation and happiness rather than winning “bigly”.