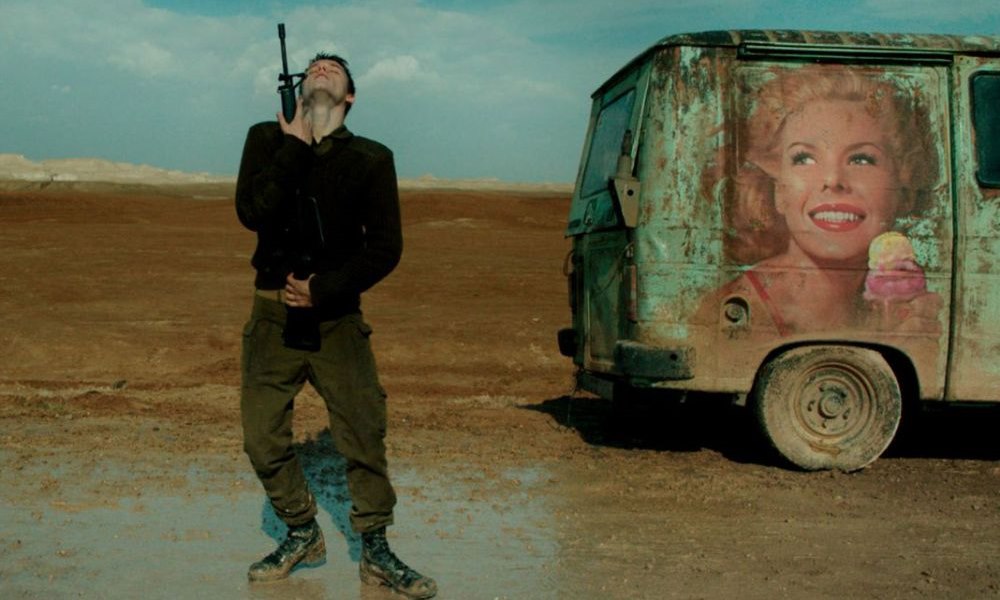 War, grief and family are the themes of Samuel Maoz’s Foxtrot, which joins the race for the Golden Lion at the 74th Venice Film Festival. It’s a daring and bold film, highly-stylised and imaginative, portraying an Israeli family’s reaction to bad news from the army.

Samuel Maoz was in his late forties when he made his debut film: Lebanon. It won the Golden Lion at the Venice Film Festival in 2009. Eight years later his second film is now also in competition and it is up there as a contender, with acting awards especially for Lior Ashkenazi a distinct possibility. Foxtrot has a neat triptych structure. The first act shows Michael and Daphna Feldman (Ashkenazi and Sarah Adler) receiving bad news about their son, Jonathan. Just the sight of uniformed men at the door is enough to see Daphna collapse to the floor.

The speed with which she is given a sedative and the professionalism of the soldiers leave the impression that a set protocol is in place and well-practised, if somewhat inhuman. Michael is given a phone number and told to drink water every hour. A soldier sets an alarm on his phone to this effect and the tolling of the alarm through the first act is a constant reminder of how he is moving away from the zero hour when he first discovered his son was dead into a future in which he is no more. Almost all of this is in extreme close up as if the family’s world has shrunk to include only their grief and nothing else. Noises are loud and unexpected. The whole tone is that of a raw exposed nerve being prodded by the camera.

Michael will kick the dog, burn himself with the hot water tap and almost collapse at the sight of his son’s face on his identity card. The bureaucracy of death continues with the state an intrusive presence, claiming the fallen soldier as their own. The second act shows us Jonathan (Yonatan Shiray) and three other soldiers guarding an out of the way roadblock, where the only thing to pass for hours is a lone camel. The soldiers kill time with stories and jokes and the greatest danger seems to be the subsidence of the container in which they bunk, which is sinking into the mud. Their whole world has a rusting, dripping and grimy texture which Maoz scans from above in extreme close up, a series of shots which hark back to Tarkovsky’s Zone by way of Jeunet’s Delicatessen.

The young men are gripped by a nostalgia for a youth they’re not having, losing themselves in dance, old music and film references. Visually everything is rich in its tactile messiness in contrast to the antiseptic postmodernism of the family apartment. These boys must also man the heavy machine guns now and then though the story takes place in a time of apparent peace, as visiting officer reminds the troops: “We are at war, have no doubt about it.” The final act returns to the family apartment but with things changed; relationships most of all. Bitterness vies with some sort of liveable acceptance and the outcome is yet uncertain. The atmosphere is duller, still with the possibility of pain and the focus has shifted from Michael to Daphne whose voice is finally heard.

“I leaned on you to make you feel strong,” she tells him, bluntly. Whereas Lebanon played out within the confines of a tank, Foxtrot is a bold and imaginative portrait of the confines of family. Maoz stylistically pulling out all the stops – an animated sequence is perhaps a stop too far – but the result is, for all the emotional depths of its subject matter, a humorous and entertaining movie. In the last act, Michael explains the Foxtrot, revealing the film’s and perhaps life’s structure: you go forward, to the right, you go backwards then to the left and you end where you started. Of course you don’t end up when you started and in this gap lives all the pain and joy.