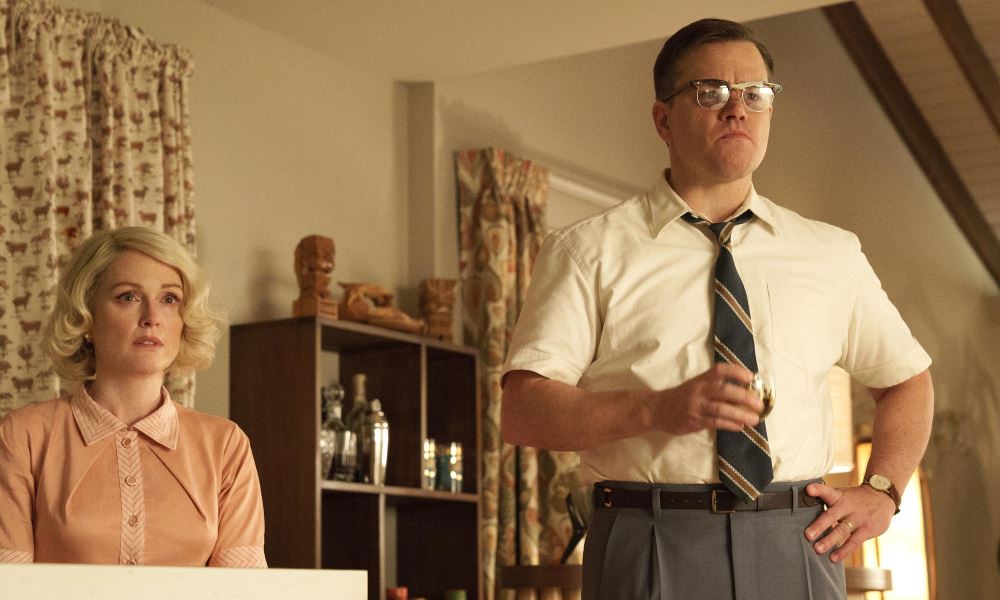 In the black comedy Suburbicon, George Clooney takes us to the small town, white bread America that Donald Trump wants to MAGA us back to and uncovers that it wasn’t as great as all that. It joins the race for the Golden Lion at this year’s Venice Film Festival.

George Clooney hit the ground running as a director with the wonderful Confessions of a Dangerous Mind and the Oscar-nominated Goodnight and Good Luck. But his luck has been down with the interminable Leatherheads and instantly forgettable if commercially successful Monuments Men. Re-jigging an old Coen Brothers script with close collaborator Grant Haslov, Clooney has produced the marginally better Suburbicon. Your ears might prick up once you hear old Coen Brothers script, but that means a script they decided not to make because they thought Ladykillers was worth doing.

Matt Damon plays Gardner Lodge, an accountant with Mad Men slicked hair, a glossy car and the pair of glasses he wore in The Good Shepherd. He lives with his son Nicky (Noah Jupe), his wheelchair bound wife Rose (Julianne Moore) and her twin sister Margaret (also Julianne Moore) in a small house in the picture perfect new town of Suburbicon. An animated sequence at the beginning of the film depicts it as a Norman Rockwell dream, and lauds its diversity: basically a bunch of WASPs from different parts of the country. That is until a black family move in, to provide a subplot that feels so pasted on that you can see where the glue has gone over the edges.

Something – and not only the escalating racial tension – is not well with this place and we are introduced to Gardner as he gets his son out of bed because there are men in the house; two bad guys (Michael D. Cohen and Glenn Flesher) who want to tie up the family and rob them. Gardner is strangely acquiescent and when his wife dies as a result of the chloroform, Nicky suspects something is up.

As with the woefully underappreciated Bob Balaban film Parents, mostly everything is viewed from Nicky’s perspective. He slowly befriends the black kid living across the garden fence; tolerates his burly Uncle Mitch’s comedy routines and eyes with growing suspicion his aunt and dad’s grieving process, part of which involves some rumpy in the rumpus room with a table tennis paddle. Suburbicon is reminiscent of many other films, but none more than Fargo with which it shares a plot. The danger here is that the TV show Fargo is already remaking this twice over.

Clooney only shows flashes of comic moxy, and everything is drowned in a now tiresome fetishizing of the 1950s aesthetic, with gizmos and supermarkets, office furniture and hairdos glossily remade. Damon puts in one of those good sport performances and there are some nices flashes of unsuspected nastiness in the pudgy middle class complacency. But Moore is sadly underused and the film only really comes alive with the arrival of Oscar Isaac’s insurance investigator, who, alas, doesn’t hang around.

The darkness at the heart of the town grows as the deplorables opposing integration go from cold looks to throwing rocks and building fences – cue the topicality siren. At the same time, the domestic criminals in Nicky’s home begin to unravel and the boy finds himself in all sorts of trouble. Violence increasingly takes the place of punch lines – not so much Grand Guignol as Petit-Bourgeois Guignol – and throughout the whole film Alexandre Desplat’s score is as ubiquitous as the music in a Tom and Jerry cartoon. In the end, Suburbicon is a town not only that you’re glad to leave but that you wish you hadn’t bothered picking up the brochure for.