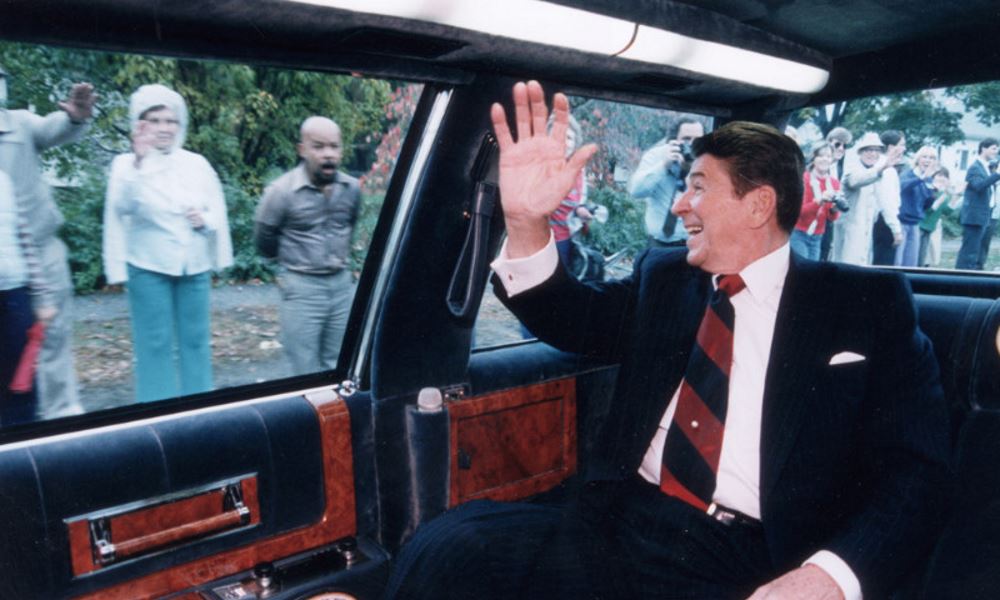 The Reagan Show is timely on a number of levels. Using archive footage, news reports and White House TV, they manage to piece together the second term of the Reagan presidency and give a sobering portrait of a man whose prime concern was always his own image.

It’s difficult to remember how disturbing it was to have a Hollywood actor for President summed up by Doc Brown’s incredulous “Ronald Reagan? The actor?” in Back to the Future. But at the time, the Gipper was seen by many as a Hollywood showman, whose sunny style and carefree wave covered a dangerously aggressive reactionary force in the world. The two sides are revealed again and again in the documentary as Reagan performs for the cameras or addresses the nation in his cosiest most avuncular style, only to break character once the broadcast is over.

At one point, Reagan records a video message of support for a New Hampshire governor, “I know him and respect him,” only to mispronounce his name in the outtake and admit to having never met the man. It’s a glossy, superficial hypocrisy but even so it’s still a million miles higher up than the present incumbent of the Oval Office. To begin with Reagan speaks in full sentences and has a quick wit and a sharp ear for a phrase. True he might repeat that phrase again and again once he’s landed on it, but it’s hard not to feel nostalgic for long lost coherence and articulate hypocrisy.

The dramatic irony of history is that the USSR threw up a man who was every bit as good a showman as Reagan. Gorbachev is seen as a young breath of fresh air against Reagan’s slate platitudes. The rivalry to win hearts and minds shoved ideology and Reagan’s convinced anti-Communism – who called the Soviet Union the “Evil Empire” – into the background as both men postured and positioned themselves around disarmament. Could it be that the egos of this showboats did more for world peace and nuclear disarmament than all the CND marches put together? The Summits are theatrical showpieces with each leader trying to best and upstage the other while at the same time appearing as friendly and chummy as the conservatives in their own countries would allow. It’s a fascinating mixture of chess and stand up comedy.

Meanwhile the media is invisibly being shaped by the White House’s control of the image. Whenever Reagan walks across the lawn of the White House the helicopter is kept with its rotors turning nearby to drown out the difficult questions. And by this time with Reagan’s ailing health, the unpopularity of Star Wars and the Iran Contra scandal breaking there was a chance that his legacy was shrivelling before the eyes of the world. This also seems to be a motivating factor urging the suddenly weakened leader to try and grab some of Gorbachev’s reflected sunshine.

This is not to say that Reagan wasn’t also genuinely concerned about the threat of nuclear annihilation – he was reportedly horrified by the 1984 TV movie The Day After which showed a nuclear attack on a Kansas town. In fact, the strength of The Reagan Show is to reveal how complicated and mixed motives were on both sides and how yet somehow a step forward, a leap even, was made in the glare of the television lights. Reagan presents a heartfelt message of peace for the New Year directly to the Russian people, and once the light goes off, mutters “Take that Mr. Gorbachev.”.