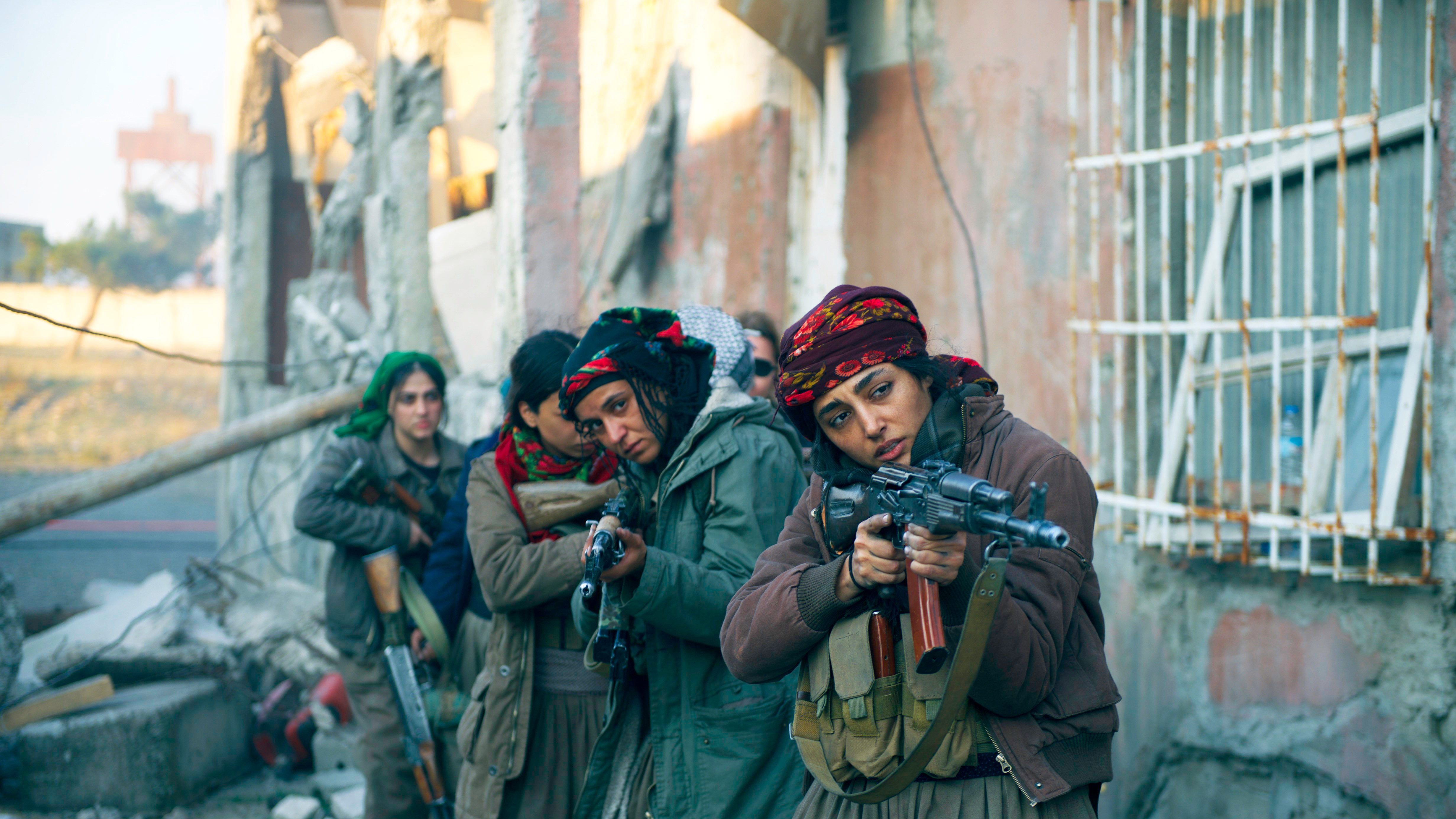 Based on a true events which occurred in 2015, with names changed to protect the identities of those involved, Girls of the Sun is an unusual war drama because its lead protagonists are women and not the usual disillusioned grunts. This isn’t some Land Girls deal or G.I. Jane action spectacle, Husson’s film is first and foremost an appalling account of stomach-churning misogyny and the sickening horrors Kurdish women met at the hands of their vile captors, after ISIS attempted to subjugate the Levant (Syria and Iraq) and established a barbaric Caliphate. Women and children were sold into sex slavery and lives of gruelling servitude. Little boys were taken and turned into killers.

One day in the town of Corduene, lawyer Bahar (Golshifteh Farahani) has her life changed forever when extremists turn up, kill all the men and take the women as slaves. While the flashback structure is occasionally disjointed to the point of clumsiness, the tale itself is horrifyingly captivating and Farahani is excellent as Bahar, a woman who is a mother, platoon leader, survivor and fierce warrior, and could never have in a million years ever imagined the course her life would take. Farahani’s portrait of a woman who rediscovers empowerment and agency on the battlefield is of course inherently tragic, as it is something nobody should ever have to go through.

Scenes of combat in urban locations recall Kubrick’s Full Metal Jacket and while the widescreen cinematography is impressive – burning orange is the predominant colour scheme – Husson’s use of close-ups brings to mind Dreyer’s Passion of Joan of Arc, if St. Joan’s face was stained with blood, dirt and snaking tears and devoid of all hope. While there are moments in this film which go beyond shocking, even if depictions of the horrors of war are relatively restrained, the narrative’s bruising power is mostly found in its portrayal of emotional violence and toxic beliefs which hide behind religious texts. For ISIS represent a blatant and outrageous attack on women’s rights, female bodies and equality.

Bahar and her battalion fight not for some nihilistic death wish having lost everything, but as a show of collective strength and unity when ISIS imagined they’d tortured such concepts out of their minds, bodies and souls. What the Kurdish women and other groups have gone through in the Middle East is almost incomprehensible for us to imagine and in the age where every war flick boasts an anti-war message, Girls of the Sun is not your traditional pacifist tract.

Sometimes, the film argues, we have to fight to protect liberty, defeat tyranny and as a matter of self-preservation when threatened with annihilation and enslavement. And it’s not as if the West was willing to come to the rescue so readily. “If oil came out of our breasts and not milk, the coalition would have come much sooner,” one fighter ruefully declares. Some might find this tough stance difficult to accept, but the key context and perilous situation faced by the Kurds must be acknowledged and not dismissed outright.