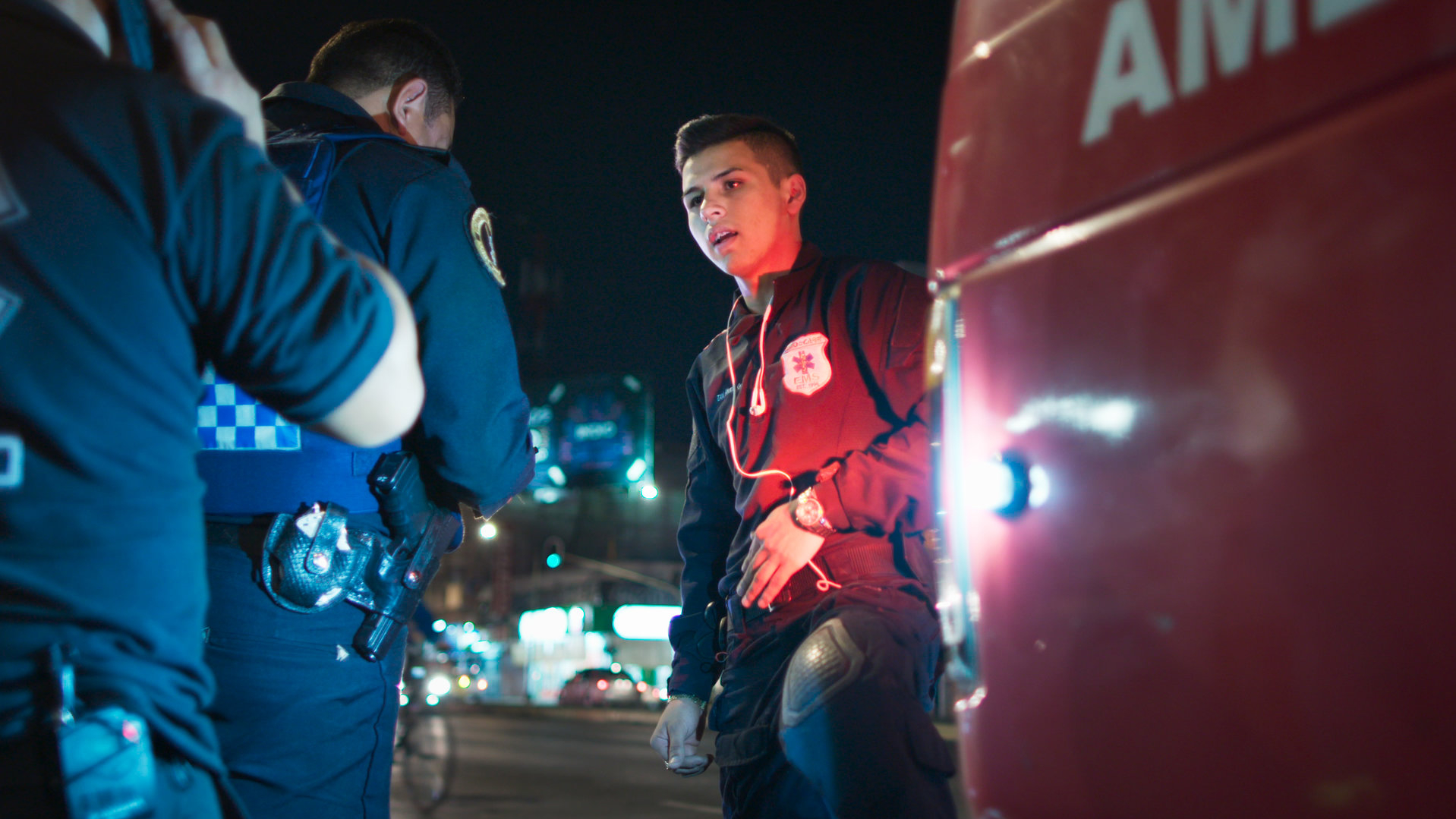 What do you do when the ambulance chasers are other ambulances? This is the question posited by Midnight Family. Nine million people live in Mexico City and yet this metropolis is served by a mere 45 public ambulances. The abundant slack is taken over by a swarm of private ambulances, manned by paramedics with little if any training; picking up emergency calls from tip-offs from the police.

The Ochoa family owns one such ambulance and spends the night monitoring the emergency channel and waiting for tips. When the call comes, they race through the night, often chasing other ambulances in order to get to the scene first while nine-year-old Josué rolls around in the back, along for the ride. Often when they arrive the scene will be horrific and the EMTs will struggle with a lack of equipment and – possibly – training as they improvise care as the family attempt to also get assurances from the patients and their families that they will be paid.

“It’s cool to see a car crash or a bullet wound,” says the 17-year-old Juan, who serves as the driver in turns with his father Fer, but the bravado is thinner than a band-aid and he often breaks down while talking on the phone to his girlfriend Jessica about the events he has witnessed. Ambulance drivers around the world have to deal with people in the most desperate, painful and even sordid circumstances. And sure enough, there are victims of car accidents, shootings, a drug addict with a baby that is not breathing and a young girl who has been brutally assaulted by her boyfriend. “Can you give me a hug?” this last one asks and for a moment the patient is surrounded by this other family and is embraced, getting more than painkillers and splints.

However, it is unclear exactly how qualified the family is and how their need to make money might compromise the welfare of the people who come under their care. Their paperwork doesn’t appear to be in order and they barely stay afloat, much of their money going to bribes to the police partly to get accidents and partly so their own illegality isn’t further investigated. In brief breaks from the night crawling, Lorentzen – who served as his own one-man crew – captures the straitened circumstances in which they live: the cramped conditions and intermittent hot water.

This is the sharp end of postmodern capitalism, the gig economy, Uber-mentality applied to healthcare and the picture is not pretty. The Ochoas are just trying to make ends meet and they believe they are helping people, are indeed proud of their work, but when the grieving mother of a dead patient asks why her daughter was taken to a private hospital which was not the nearest, you can see how for-profit emergency care is, to say the least, downright wrong.