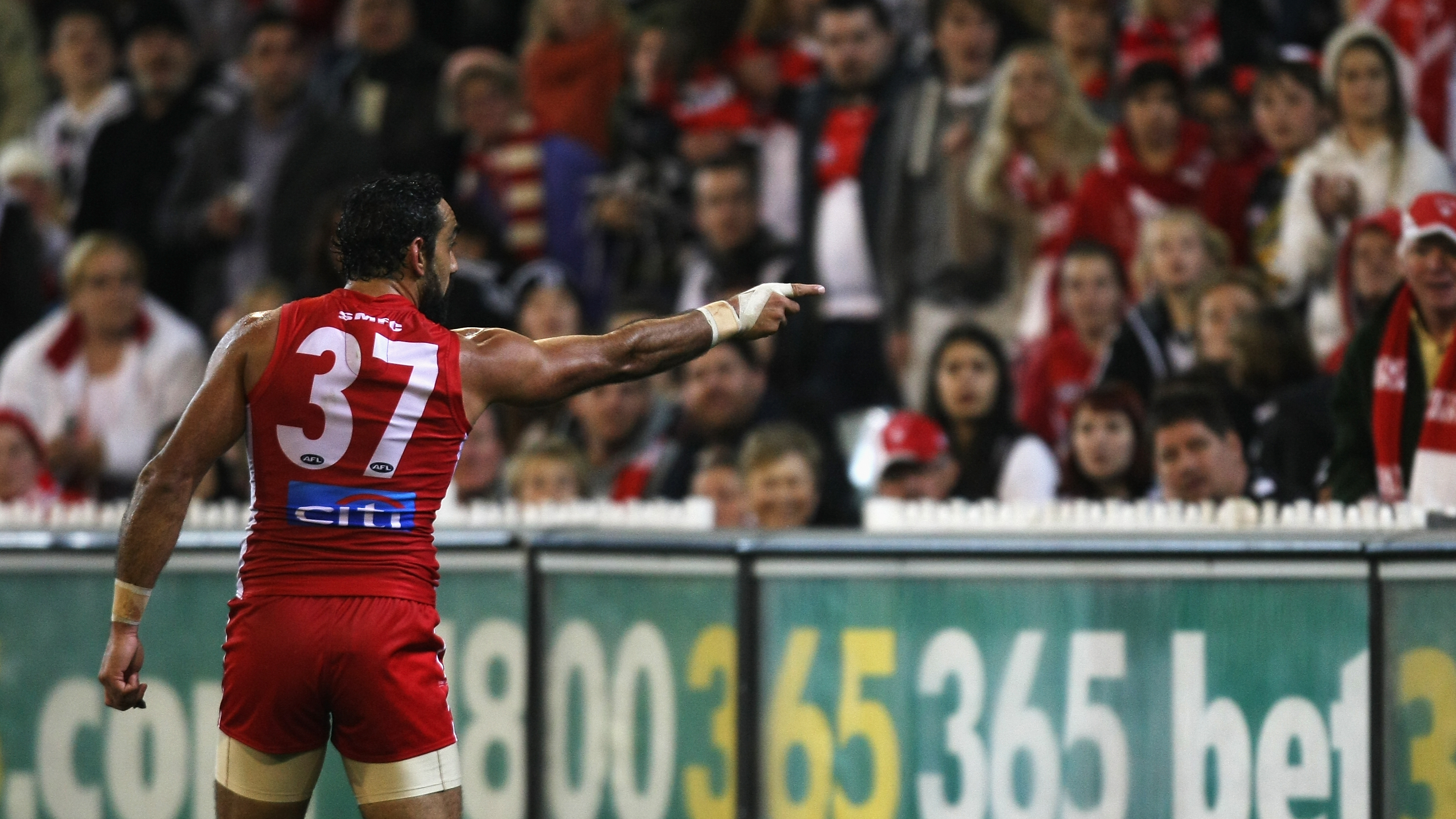 Adam Goodes points into the crowd alerting security to comments made during the 2013 AFL round 09 match between the Collingwood Magpies and the Sydney Swans at the MCG, Melbourne on May 24, 2013. (Photo: Andrew White/AFL Media)

In the febrile context of the #BlackLivesMatter protests arrives The Australian Dream, Daniel Gordon’s study of the appalling treatment of Aboriginal AFL star Adam Goodes by racist fans. The ensuing controversy exposed the structural racism at the heart of Australian society and is a timely exemplar of the endemic racism of the Global North.

On 24 May 2013, at the Melbourne Cricket Ground, Sydney Swans star and AFL hero Adam Goodes embarked on arguably the most important game of his career – though not for the reasons he was expecting. Late in the match, as Goodes passed the terraces of the opposing Collingwood Magpies, a teenage girl shouted a racial slur at him. Only two metres apart, her mindless insult cut through the roar of the 65,000-strong crowd to find its target.

Goodes’ anger and pain were instant and severe enough for the TV cameras to pick it up; moments later, he demanded that the girl was removed from the stadium before himself walking off the pitch. Goodes would later score the final goal in a thumping 47-point victory over Collingwood. It was emblematic, perhaps, of a moral victory that would do little to comfort Goodes over the coming weeks and months as a tide of public fury was unleashed against him. The irony of the game being the ‘Indigenous Round’ of the AFL – on the twentieth anniversary of Aussie Rules icon Nicky Winmar defying racist fans himself, no less – is not lost.

This infamous moment in Australian football is the lynchpin of Gordon’s film, but its real subject is the insidious racism in Australian society. Describing the prejudice and discrimination that The Australian Dream examines as ‘institutional’ doesn’t go far enough. Indeed, the racist attitudes we see expressed are certainly a problem that is embedded in the structures of professional football, but as British footballer John Barnes has been saying for years, they are merely indicative of deeper, more historical racist discourses.

The talking heads, archival footage and slightly odd reconstructions that Gordon employs to describe this point are unlikely to win high praise for originality. But as The Australian Dream methodically sets out the unspeakable, too-often unspoken, injustices of European colonialism – the consequences of which are contemporaneously sanitised and celebrated – the novelty of formal innovation pales in comparison to the more important issue.

Less successful is the inclusion of voices from the opposing ‘side’ – specifically that of irrelevant right-wing blockhead Andrew Bolt. Having inserted himself into the controversy first time around, the pundit’s inclusion can generously be read as allowing him to hoist himself by his own petard. Nevertheless, his faultlessly ignorant and trenchant perspectives do nothing to nuance the analysis. For people of colour, whose need for structural change have been ignored for decades, the story of The Australian Dream will be all too familiar; there is a seething irony that it still needs to be told.

The Australian Dream is released on demand on 12 June. theaustraliandream.co.uk