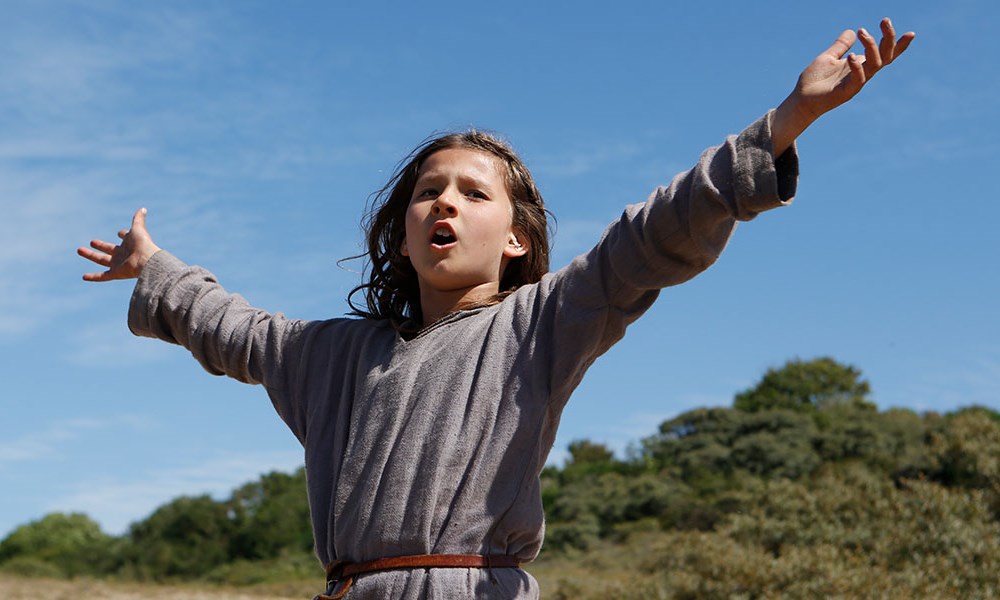 A charming, if an insistently odd musical representation of Joan of Arc’s early years, Bruno Dumont’s latest offering Jeannette: The Childhood of Joan of Arc is a compelling blend of juvenile dissatisfaction and Catholic anxiety – minus the humdrum historical accuracy.

Jeannette is instead a psychological portrait of the young Joan of Arc, imagined as a girl whose juvenile angst is channelled into a belief that God has chosen her to deliver France from the English. Non-professional actor Lise Leplat Prudhomme gives a terrific performance as the young Joan, a disarming mixture of the adorable and fierce zealotry. A head-banging sequence with nuns early on is particularly delightful, where identical twin nuns (Aline Charles and Elise Charles) help temper Jeannette’s existential crises.

Her anger at the deaths of the innocent is fused with a paradoxical desire to ‘kill war’, though the young Joan strikes a more pacifist figure than her older incarnation. Much of The Childhood of Joan of Arc is patently ludicrous – nuns headbang and Jeanette claps along, her teen uncle raps about lying in the sight of God – but the spoken and sung dialogue is deceptively weighty. Dealing with crises of faith, divine grace, and the patriotism of warfare, Jeanette weaves an inter-related web of passion, fervour and rage. Indeed, the staccato line delivery is often so dense that it’s easy to miss the poetry of the writing.

The cinematography, characterised by static medium shots, is weirdly heavy and can feel repetitious – as uncompromising as Jeanette’s youthful fervour, though some lovely shots, particularly an aerial view of the beach, do break up the monotony. The banal visuals frequently work in the film’s favour, too; Jeanette’s first vision is a disarmingly mundane experience more reminiscent of the staging of a school nativity-play than of the heraldry of divine intervention. When the narrative skips to an adolescent Jeanette secretly plotting to head out and fight the English, the slow pace picks up a little with a greater variety of locations.

Comically, the metaphor of Jeanette as France’s shepherdess is highlighted with the well-time bleating of her erstwhile companions as she sings of defeating English soldiers. The Childhood of Joan of Arc is undoubtedly an acquired taste, and the combination of dense wordplay, minimalist musical numbers and repetitious, occasionally flat cinematography can be hard going for even the most seasoned viewers. But much like young Jeanette, there is no compromise in Dumont’s vision that mixes the irreverent and the austere.