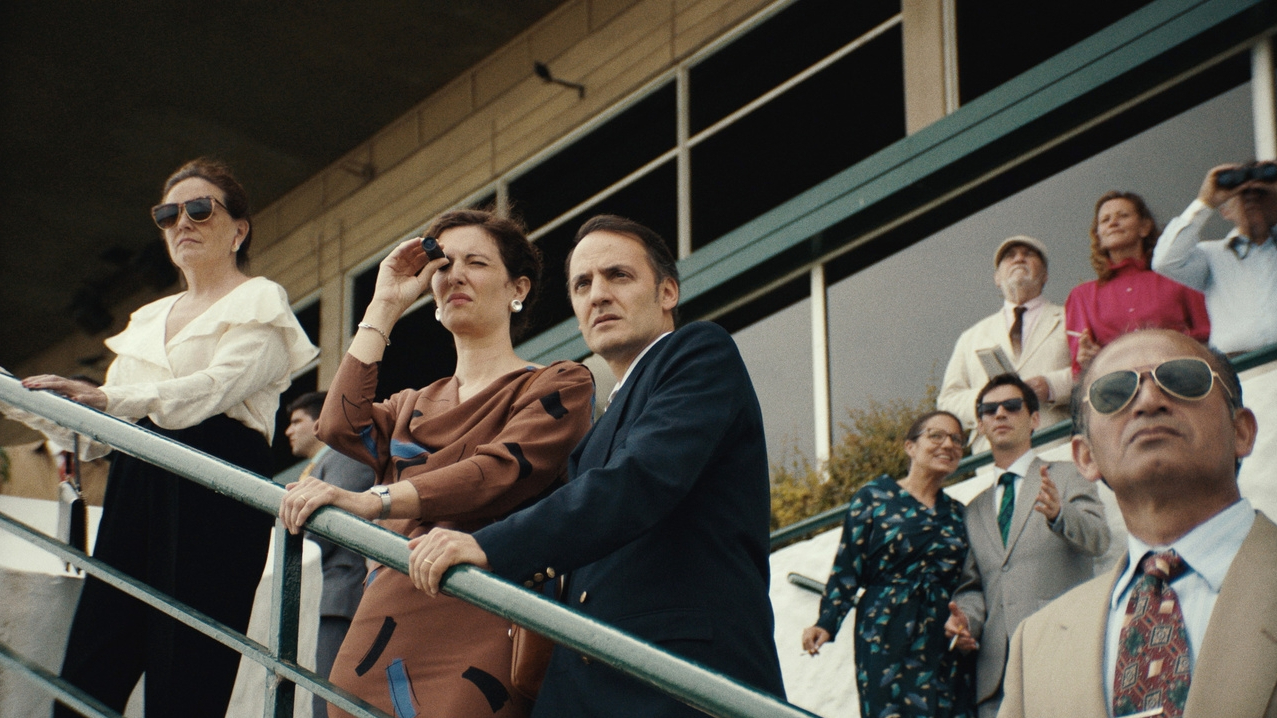 Set amidst the 1976 Argentinian coup during the reign of the military junta, Andreas Fontana’s debut feature is a methodical study of the banality of evil. Tracking the dealings of a Swiss banker growing increasingly frantic to hang on to lucrative clients spooked by the turmoil, Azor eschews outward thrills or genre intrigue in favour of unspoken dread, papered over with the veneer of normality.

In the world of Azor, the signs of upheaval are everywhere in the margins. Armed police and militia patrol the streets and shepherd citizens through checkpoints. Colleagues, friends and relatives routinely disappear. In most political thrillers, the random disappearance of loved ones would be chilling enough, but in Azor, it is in the uncanny way they are spoken of after the fact that is most revealing. The missing at once being chilling spectres, verbal spaces where people used to be, spoken of only in hushed terms. Yet, paradoxically, the disappearances themselves are treated as entirely normal; a simple part of the state machinery and the cost of doing business – the normality itself is a sure sign of the current reality’s victory over its subjects.

This is never better expressed than through Yvan de Wiel’s (Fabrizio Rongione) missing partner, Keys, who, like, The Third Man’s Harry Lime, hangs over the film as an unseen wraith, always one step ahead of de Wiel. We’re never sure if Keys has gone to ground of his own volition or whether his obnoxious personality has finally met the bad side of one his many unsavoury associates. Azor invites us to look for clues of Kurtz-esque Keys’ whereabouts – doesn’t his very name invoke a search for a hidden truth waiting to be revealed? – but while the soft-spoken de Wiel’s timidity loses him client after client, it’s easy for us to get wrapped up in a puzzle with no pattern. Like all the disappeared, Keys’ vanishing is a box with no lock; tension without catharsis. As de Wiel’s clients speak in riddles and hint around the world’s turmoil, interested only in profit and power from pandemonium, searching for a cohesive worldview is a fool’s errand.

Conceptually, Azor, is brilliant and its dreamlike editing that joins one meeting to the next with little connective tissue is often intriguing. But as a viewing experience, it is roundly obtuse with a repetitious, meandering narrative. Searching for a conventional thriller’s taut narrative structure of building tension and catharsis invariably leads to frustration. Indeed, describing Azor as a thriller is, to put it lightly, a stretch. The whole point of the film is that what we see is without visible incident, exemplified by de Wiel’s endless failed deals and the implied – but never witnessed – moral blackness of his clients. The action happens in the spaces outside of the frame; Azor is the eye of the storm, the appearance of normality, the illusion of stillness and calm. It is, if anything, an anti-thriller, a “non-mystery”, just as likely to lull us to sleep as to excite the senses, before it wakes us up, our hands and feet bound, ready to be dumped into the abyss.