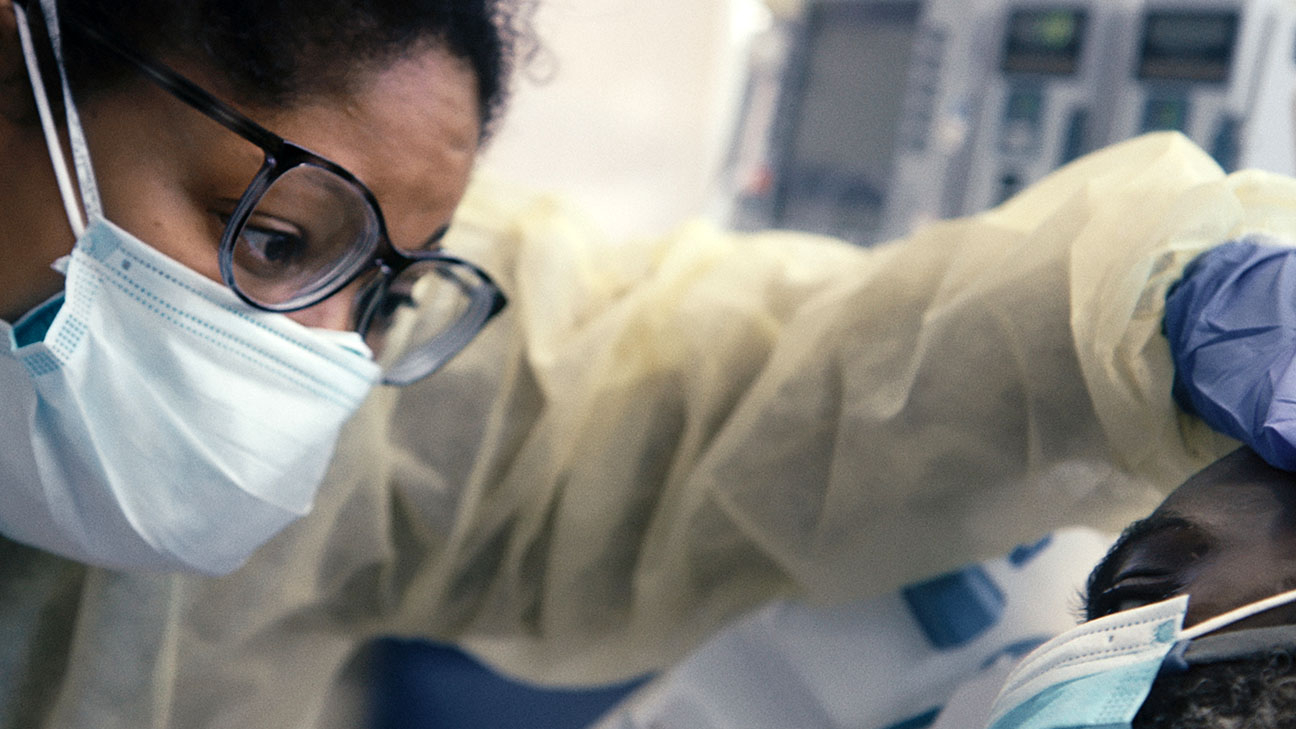 THE FIRST WAVE With exclusive access to one of New Yorkís hardest hit hospital systems, Oscar-nominated and Emmy Awardñwinning director Matthew Heinemanís THE FIRST WAVE spotlights the everyday heroes at the epicenter of COVID-19 as they come together to fight one of the greatest threats the world has ever encountered. Leaving a devastating trail of death and despair, this once-in-a-century pandemic changed the very fabric of daily life and exposed long-standing inequities in our society. The ìfirst waveî of COVID-19 ravaged New York from March through June 2020. With Heinemanís signature approach of character-driven cinema vÈritÈ, THE FIRST WAVE documents those harrowing first four months, embedding with a group of doctors, nurses, and patients on the frontlines as they all navigated the crisis. Their distinct storylines each serve as a microcosm through which we can view the emotional and societal impacts of the pandemic, and are a testament to the strength of the human spirit. (Credit: National Geographic)

Radio static crackles and emergency responders report a growing number of calls. What begins as a steady stream is soon a torrent; at the Queens hospital where she works, Dr. Nathalie Dougé notes that from one or two patients displaying symptoms of a new, unknown and unpredictable virus one week, it is every single one the next.

Within the first five minutes of Matthew Heineman’s The First Wave, an elderly man is told “I love you, baby” by his wife via a jittery FaceTime call, goes into arrest, is brought back by a team of medics and then, suddenly, flatlines. It’s March 2020, and this same story will play out with alarming regularity over the four months we spend in close quarters with the staff of the Long Island Jewish Medical Centre. “There’s no clear pattern,” Dougé says. As a viewer, this abrupt jump back in time to the present tense is a jarring one.

More than a year and a half may have passed since these first deaths occurred, we do now have vaccines, but the fear that came from not knowing how to treat those sick with Covid-19, how quickly they declined, and uncertainty around how the virus was transmitted, feels altogether too immediate once again in this brutally candid documentary. You are unlikely to see another of such raw emotion this year. Instantly striking is the extraordinary access granted the filmmaker and his team.

Without need for direct interrogation or comment, Heineman’s camera does the talking, asks the tough questions. Far more engaged, and indeed engaging, than a mere fly on the wall, there are close-ups of glassy-eyed, vacant stares, we see the monumental effort taken to give even the meekest of thumbs ups in response to a doctor’s questions; a man breaths his last in chilling, guttural rattles after being taken off his respirator. A glance at a watch marks the moment that yet another person has fallen victim to the virus. No news programme showed this. There is no filter to hide, disguise or diminish the truth of these people’s suffering. That said, sound and image are occasionally distanced. Retrospective – albeit from the very recent past – spoken testimony from Dougé and others is heard over footage of the panic and desperation of events occurring in real time. By no means keeping issues at arm’s length, this does allow pause for thought, recollection, perhaps the beginnings of acceptance.

Junior staff will later speak, or at least attempt to, at a press conference. Here they try to explain just how difficult it is being the digital conduit between distraught family members and patients, entirely unable to speak or acknowledge their presence. It will take time for the mental and psychological scars to be fully understood, let alone heal. Mercifully, neither Donald Trump nor anti-mask or anti-lockdown demonstrations will appear in The First Wave ­– though they should be the first to see this film. In choosing to narrow the focus of his latest project to a handful of stories, telling them well and with great compassion, the Cartel Land and City of Ghosts director renders a global issue human, intimate.

“I’m so young and I have a family, please don’t let me die.” The words of 35-year-old Ahmed Ellis, relayed to us by his doctor, could be from a patient in any hospital, anywhere. These families may be from Queens and the Bronx, but they could be anywhere across the USA, or the world. The bigger picture, however, is there. The former Governor of New York Andrew Cuomo is the only politician to feature prominently. We overhear news headlines from unseen screens, and indeed watch people watching television. But it is their reaction to and how they respond to these developments, both in their professional and private lives, that Heineman targets. Dougé, head in hands, is at home with her dog as it is reported – in April – that New York and New Jersey are now the global epicentre of the virus. She has previously burst into tears when surprised by a birthday Zoom call from dozens of friends.

That conflict of emotion, swinging from one end of the spectrum to the next, is keenly felt – and experienced – as a viewer, too. Heineman again pulls no punches with his latest work. Entering May in the film’s final act, as George Floyd’s murder at the hands of the police sparks the fire of inequality and hatred, it’s underlined that only through togetherness and common understanding will we overcome, whatever the event is that must be confronted. The First Wave stands as an honest, hard-hitting and compassionate reminder of loving thy neighbour wherever and whoever they may be.