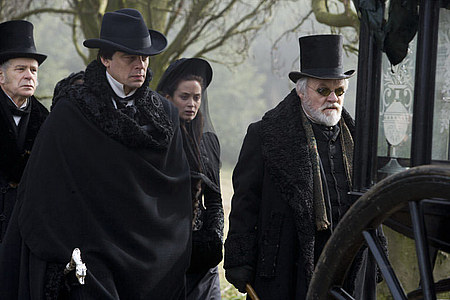 The main problem with The Wolfman (2009) is its visual effects,ironically, the defining feature of the 1941 original. They look invariably like someone has been dissatisfied with the final cut and has inserted ramps – or quick changes of speed – to accelerate the action scenes. A werewolf might appear from the gloom at real-time, human speed, but suddenly jolt across the screen at hyper-speed. Whether this is to hide dodgy prosthetic inserts or to shorten the length of action set-pieces remains a mystery, the only certainty is that it does not pass for lycanthropic agility just post-production alteration.

These lightning fast bursts are combined, in the action scenes, with fanboy pleasing blood and guts – to a gratuitous extent. The blood and guts elements are not an organic part of the film’s planned shots – they are crowbarred in “inserts” or quick extreme close-ups of severed limbs, heads and splatters of blood. The point here is that these close-ups could well have been filmed after the film and inserted as needed in the perfect dial-a-gore-level system. There was either no directorial vision at the time of filming; or some high-powered producer with delusions of being artistic has come along in post production and, with arrogant unconsciousness of basic film-making technique, has insisted that “more gore” can be inserted with no negative impact on the final cut. Believe me, it happens. 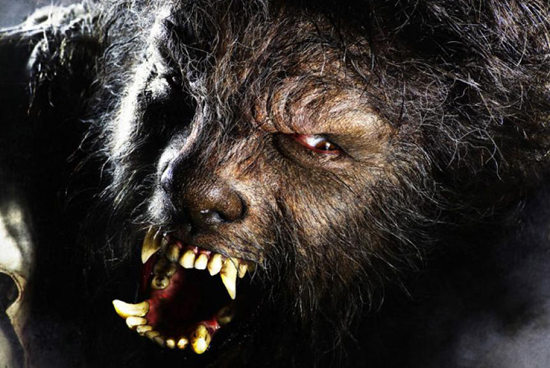 Now, all of the above is then interwoven with long, exposition-heavy, dramatically lit, dialogue scenes – and this establishes a completely different tone to what we see in the action scenes. Due to the narrational weakness of the film’s visual storytelling, actors constantly have long scripts of exposition and plot happenings to fill us in on, but that aside, some actually start to shine. Benicio del Toro essentially ‘phones in’ his performance, but Hopkins and Weaving thoroughly enjoy the hyper-gothicism in which they find themselves. What we get from these two are the germs of character development and building suspense. Unfortunately, the acute tonal shift from these scenes to the cartoonish gratuity of the action pieces, breaks all the tension and leaves us deeply confused as an audience.

The Wolfman is a film that, armed with no clear directorial vision, attempts to take on the world. Whether its Joe Johnston’s plan, or the naive afterthought of some executive producer, this is a film that attempts to simultaneously nail every demographic out there – fanboys and cultured cinema-goers alike. Unfortunately, The Wolfman ends up being a metamorphosed mess – like its protagonist – a half-humanistic, half superficial amalgamation – not the well-defined, tense and powerful supernatural event it should have been.