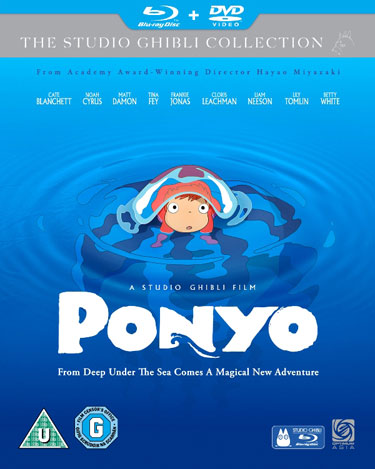 There is no doubt that we are in the middle of an animation boom, a ‘silver age’ of animation if you will. The contemporary film market is saturated with computer-animated films. This year so far has seen the rerelease of Disney Pixar’s Toy Story (1995) and Toy Story 2 (1999) on Disney DVD and Blu-ray, while CG films have saturated theatres. This summer looks like no exception with the release of Toy Story 3 (2010) and the final instalment from the Shrek films: Shrek Forever After (2010).

With this in mind, the latest feature from Studio Ghibli – the brainchild of Hayao Miyazaki – comes as a breath of fresh air. Ghibli are the only one of the seven major animation studios yet to release a CG film and Ponyo (2008) is another example of Ghibli’s ability to make fantastic films with traditional animation techniques.

The film tells the story of Sosuke and his relationship with Ponyo, a fish that escapes her family and through a relationship with Sosuke makes the transformation into a human. Ponyo’s disappearance from her family angers her father and he begins to look for her above water. The longer that Ponyo stays away from her home, the worse weather conditions become, to the point that Sosuke’s entire homeland is flooded. Sosuke and Ponyo thus set out on a rescue mission to look for Sosuke’s mother, a carer who leaves to watch over the elderly during the storm.

Like many of Miyazaki’s other films, Ponyo is a commentary on the family unit. The film makes it explicitly clear that Sosuke’s father, Koichi is away a lot of the time working as a fisherman, much to the distress of his mother. This often forces Sosuke to take on a father figure role when things get hard. This is contrasted with the representation of Ponyo’s family. Her father, Fujimoto forbids her to go to the surface and is a very repressive force. 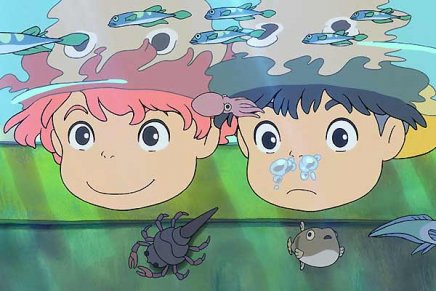 Ponyo is a brilliant examination of parent-child relationships, and this gives the film more depth, much more than just a tale of childhood friendship. However, one of the films limitations is the narrative. Whilst Miyazaki’s other films like Howl’s Moving Castle (2004) and Spirited Away (2001) subvert narrative qualities, Ponyo seems to follow a much more linear structure. Perhaps some of the artful qualities of Ghibli’s previous films are lost, but the simpler narrative structure works for a film much more concerned with childhood and family relationships, much like Miyazaki’s My Neighbor Totoro (1988).

From the outset, Ponyo aims to make an overt commentary on environmental issues, much like the 2008 hit from Pixar, WALL-E, and Miyazaki’s own Princess Mononoke (1997). These environmental commentaries are communicated through Ponyo’s parents. Her mother, Gran Mamare, is a goddess of the ocean and her father tries to forbid her from going up to the surface. Although her father could not be described as a villain, he is certainly the antagonist for a large part of the film. The other antagonist is the environment itself; raging storms and catastrophic weather tries to take Ponyo from Sosuke and return her to the sea, communicating the fact that nature must be respected and that a natural balance is important.

Ponyo also boasts an emotional orchestral musical score composed by Joe Hisaishi. The score complements the deep use of colours and paints the developing relationship between Sosuke and Ponyo perfectly. One of Ponyo’s great successes is that as well as appealing to Studio Ghibli’s established fan-base, the film constructs a simple tale about being a child and growing up which will appeal to a much wider demographic. The film represents this both in the metaphorical sense – Ponyo making the transformation from an under developed sea creature to a human – and the literal sense, with Sosuke taking charge and going out to search for his mother.

Ponyo is a film that can be enjoyed by all; the animation is breath taking, while the music complements the story and animation style perfectly.