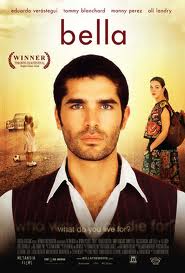 Jose (Eduardo Verastegui), a rising soccer superstar has a dazzling career ahead of him until a fatal accident dramatically alters the course of his life. He shifts down a gear, grows a bushy beard and takes work as a chef in his brother Manny’s (Manuel Perez) New York restaurant. Here he meets Nina (Tammy Blanchard), a waitress, fired for being late one too many times.

Nina also faces a tough choice. When she is sacked, the two spend a day together sharing past experiences and visiting Jose’s half-Mexican, half-Puerto Rican family. Predictably, they help each other to heal and together they reach a moral decision that will impinge on their lives forever.

Bella (2006) was Alejandro Monteverde’s feature directorial debut in 2006 and won the People’s Choice Award at that year’s Toronto Film Festival. Since then, it has been screened at various festivals, and one wonders why it has taken four years to be released in the UK. It may well have been that the producers realised this would be a hard film to sell over here. Reminiscent of the hugely popular Mexican ‘telenovelas’, I’m not sure British cinema audiences will be easily won over by its mawkish themes. What works well on television does not always translate well onto the big screen and, despite some arresting moments, for the most part I found Bella’s cloying sentimentality a real turn-off. 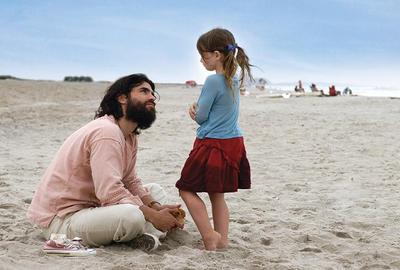 The film effectively follows two disillusioned people as they fall in love with life again. Unfortunately, Monteverde is too heavy-handed in his treatment: The juxtaposition between the soaring sky-scrapers and busy streets of New York and the gently lapping waves of the ocean; the blind man who asks the pair to describe the day for him; and Nina walking around New York in a Mexican Frida Kahlo costume, as though displaced within her own city.

Frequent close-ups of the characters and numerous flashbacks merely emphasise the lack of a compelling story. Nina is so shadowy a character (her father died when she was young and she had a difficult relationship with her mother; end of story), it is hard to feel any sympathy for her. Her frequent tears seem manufactured to enhance Jose’s image as a macho man with heart.

Food and cooking inevitably feature but not enough to make this a foodie’s delight. Playing against the clichés, Bella’s depiction of a successful, middle-class Mexican family living in New York ultimately keeps it afloat. Otherwise, this is predictable, dull fare that wears its heart on its sleeve and leaves little room for plot progression, subtlety or dramatic poignancy.