“The only really satisfactory way to dispose of Peeping Tom would be to shovel it up and flush it swiftly down the nearest sewer”, wrote Derek Hill in his review for The Tribune after seeing Michael Powell’s 1960 psychological thriller, Peeping Tom. A vicious and petulant outburst to say the least, it is perhaps the most memorable of offensive one-liners that riddled the press surrounding Peeping Tom’s initial theatrical release. However, although Hill’s remarks are perhaps the most disdainful, other critics made similar judgements and the dominant epithets of “obscene”, “filthy”, “vulgar” and “disgusting” were consistently attached to Powell’s feature.

Subsequently, Peeping Tom flopped and was quickly withdrawn from theatres – the Earl Grey drinking, quintessentially British prudishness of snobbish critics proving all too powerful in their attempt to drive the film into near critical oblivion – or at least that is what everyone thought. Ten years later, when the British press thought they had finally seen the last of this “heinous” feature (presuming that it had plummeted into the depths of a certain cultural abyss), a young New York filmmaker managed to get his hands on a 35mm uncut print of the much maligned Peeping Tom, and as they say, “the rest is history”. 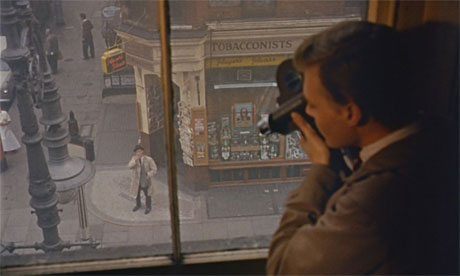 Championing the film as a cinematic masterpiece, Martin Scorsese was able to prove to the masses that the original lambasting comments were in fact completely delusional, and he was so convinced of its genius that he set out to promote the film, actively seeking for the recognition that he felt it deserved. With Scorsese’s growing success as a filmmaker came the reputation of him being an authoritative voice within cinema, and effectively this allowed him to use his love and discussions of movies as a conduit to elevate the critical status of Peeping Tom.

Helping the funding for a cinematic rerelease out of his own pocket, Scorsese got the film onto the 1979 New York Film Festival programme and back into the public consciousness. In the proceeding years he continually declared the film’s historical importance, and with the help of his long-time editor, Thelma Schoonmaker (who incidentally is the widow of Michael Powell), he has implored audiences to see the film in a mission to preserve the memory of one of British cinema’s greatest works. This being said then, it was with a great honour and privilege that I was able to attend the Fiftieth Anniversary rerelease of Powell’s disturbing insight into the mind of a surreal killer, all within the comfort of the Curzon Soho and accompanied by the likes of Scorsese, Schoonmaker, actress Anna Massey and Powell’s son, Columba Powell.

Broadcaster and writer Francine Stock took to the stage immediately after the film and introduced Scorsese, Schoonmaker, Massey and Powell (Massey being a delightful addition to the advertised line-up). Furthermore, the audience gratefully acknowledged Noreen Ackland, the film’s editor, who at the incredible age of 89 was present in the audience. Stock moderated the discussion and asked questions which in turn were answered by each of the guests individually, ranging from the astute and intelligent repartees of Scorsese, Schoonmaker and Massey to the somewhat nervous and uninterested replies from Columba Powell – at moments clearly showing that he wasn’t paying attention to any of the deployed questions. 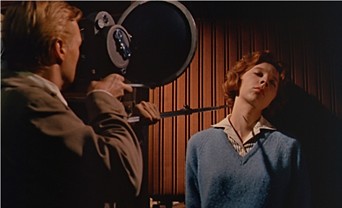 As the conversation continued, Scorsese made reference to some of his films such as Raging Bull (1980), and how Peeping Tom inspired him, noting how the film is about the “madness of making movies”. Interestingly, in discussing Peeping Tom’s style, and, in extension, the technology, he briefly flirted with information about his latest production Hugo (2011) and his encounters with filming in 3D. The discussion also raised ideas surrounding why the initial reviews were so vitriolic, with Scorsese and Schoonmaker commenting that one reason could be behind the sense of an uneasy empathy we feel for Mark’s character.

Ultimately, it is tragic how Powell’s career never fully recovered from the scandal of Peeping Tom’s initial theatrical release, and a crying shame that its contemporary audience never saw it for what it truly was. However, due to its recognition today as a misunderstood masterpiece it has become more popular and revered than it could have ever possibly imagined. In its fifty-year existence that slanderous critic Derek Hill, who was initially so sure of himself, has since been made to eat his own words. Now, one thing is for certain though – this cause célèbre is here to stay.