If you go down in the woods today, you’re sure of a big surprise: The Secret of Kells (2009) is a weirdly unique Irish animation which tells the story of the Book of Kells – currently on display in Dublin’s Trinity College – a colourful manuscript made by monks in a tiny village who were under threat from a Viking invasion.

Not your average inspiration for a movie, perhaps, but that didn’t seem to deter director Tomm Moore who has produced an exquisite, vibrantly stylistic animation. 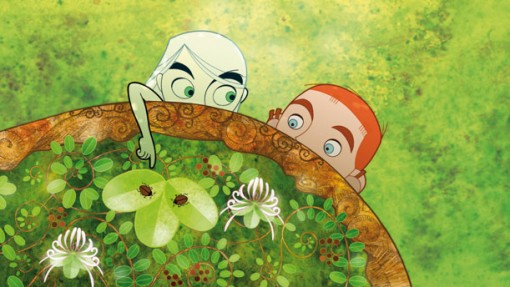 The Secret of Kells begins with a chicken being chased around town, but soon we’re introduced to Brendan (Evan McGuire), a small boy with red hair and a stern Uncle, Abbott Cellach (Brendan Gleeson). Undeterred by the Abbott’s obsession with bolstering the village defences, Brendan is fascinated by Brother Aidan (Mick Lally), a master illustrator and monk from Iona. With him he has brought the “Book of Kells”, a source of hope and Gospel in a time of darkness.

Divided clearly between light and shadow, the cloud of incoming violence is a bold blot on the landscape; the enemy forces are angular, geometric beasts, accompanied by pitch-black crows that conjure an ominous sense of dread. It’s quite intense for a PG certificate, but kids will be transfixed throughout; The Secret of Kells is a vivid delight, with its simple line drawings and overlapping oblongs. At just 75 minutes, Moore’s Oscar-nominee is a shifting kaleidoscope of imagination that blows many of its 3D competitors clean off the page.

The Secret of Kells is an impressive and idiosyncratic tale, which blends calligraphy and history to paint a gorgeous illustration of Irish legend. Ravishing.