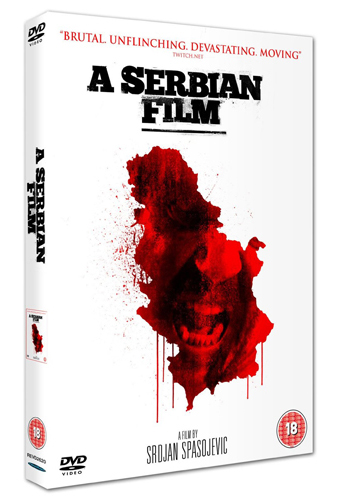 There are, it would seem, a growing number of films that can claim to have at one stage carried the hallowed moniker ‘the most controversial film of all time’. Controversy is, of course, entirely subjective – Mel Gibson’s The Passion of the Christ (2004) was controversial in the context of its religious content, whilst David Cronenberg’s Crash (1996) amassed the majority of its notoriety through the film’s exploration of sexual fetishism.

However, with the release of Eastern European indie horror A Serbian Film (2010) late last year, controversy had seemingly passed into the realm of objectivity, as Srđan Spasojević’s film went out of its way to poke, penetrate and graphically portray the large majority of the 21st Century’s remaining social/sexual taboos. If the UK’s Daily Mail were to be believed, A Serbian Film had something to offend everyone.

The British tabloids had already been sharpening their knives in anticipation of A Serbian Film’s release after it was pulled from its headline slot at this year’s Film4 Frightfest (this was due to the fact that the festival organisers felt it wrong to screen a heavily cut edit of the film after the uncut version was banned from screening by Westminster City Council). The film later went on to premiere at the Raindance Film Festival under the facade of a private event, but is A Serbian Film really a meaningful, relevant mind-fuck, or yet another trashy example of hype proceeding a fall?

Srdjan Spasojevic, the first time director of A Serbian Film, has described his debut feature as “a diary of [the Serbian people’s] molestation by the Serbian Government”. As with many of the past’s most infamous movies, the intention of the film is to confront social issues through the graphic depiction of extremity, a wake up call to the passive, blockbuster-devouring masses to sit up and take note of the injustice and corruption that surrounds them. What’s more, it is clear from the opening scenes that A Serbian Film is not just another rehashed, insincere homage to the age of exploitation cinema. A highly stylised introductory sex scene is revealed to be just that, with the camera pulling out to frame a child watching a porn DVD starring his father Milos (Srdjan Todorovic), a now retired adult film star.

Unfortunately, despite an engaging (and often humorous) opening third, the film quickly loses its way as we discover Vukmir’s true ‘tastes’ – namely a fascination with extreme sexual violence, necrophilia and paedophilia. All character development is hastily thrown out of the window in favour of a drug-induced orgy of sex, rape, death and bodily effluence. Any remnants of socio-political commentary from the film’s initial scenes are ultimately washed away in a sea of sweat, blood and semen, leaving behind only the broadest, most unsophisticated of allegorical metaphors (e.g. the act of rape as the physical manifestation of a country’s economic and emotional rape of its own people).

Films such A Serbian Film will always ignite debate regarding film censorship and the role that cinema plays/can play within a given society, and this is obviously to be encouraged.  However, it must be said that the BBFC has come a long way since the dark days of the 1980s and the Video Recordings Act. The version of A Serbian Film made available for review was 95 minutes in length after 4 minutes (exactly 49 shots, making it the UK’s most censored film in 16 years) of cuts suggested by the BBFC were made in order to pass the film with an 18 certificate.

What initially appeared to be an example of heavy handed censorship in regards to a relevant, new independent project from a cinematically-sparse nation is perhaps more a damning signifier drawing attention to the apparent absence of a disciplined editor, unable (or unwilling) to sacrifice headline-winning viscerality in favour of crucial narrative fluidity and cogency.