Somewhere between inspired and exceptional lies Bobcat Goldthwait’s World’s Greatest Dad (2009). A pitch black comedy fashioned at the stroke of midnight in a deep, dark cave. The ever brave Robin Williams is on lead role duty as failed writer and single father Lance, a nice but spineless poetry teacher struggling to keep his seemingly disturbed son Kyle (Daryl Sabara) on the straight and narrow.

If that short plot summary sounds like the premise for an atypical, schmaltzy family drama which you would rather gouge your eyes out with a hot spoon then spend 99 minutes watching, then World’s Greatest Dad is the film for you. There are no traces of sentimentality here. Nobody triumphs over adversity and the only moral message (if there is one at all) is that most people are despicable, damaged hypocrites. 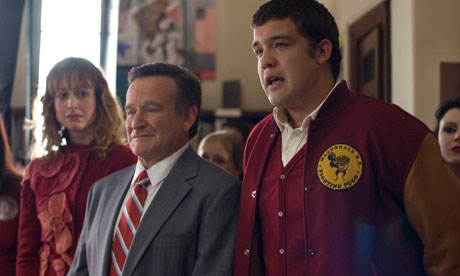 Kyle has learning difficulties, is socially inept and also has an addictive personality, but rather than pat him on the head and ask us to sympathize, writer and director Goldthwaite does something different. Although the divorce of his parents, his awkward age and his father’s poor discipline probably contributed to Kyle being a gigantic arsehole, that doesn’t change the fact that he’s still a gigantic arsehole.

Difficult, sweaty and an abusive sexual deviant, Kyle is the quintessential nightmare teenager. He has a warped view of women, no respect for his father and a raging hatred of his fellow pupils. He might also be the only truly honest person in the school, but that all depends on your perspective and I’m not going to give anything else away.

Williams is solid and restrained as the lonely, flawed but ultimately decent Lance. Few actors have the stomach for this kind of material but time and time again the man takes risks and refuses to be pigeon holed, which is an admirable quality indeed. Sabara is equally excellent and the rest of the cast are all class acts, especially the delicious Morgan Murphy as Lance’s flaky pseudo girlfriend.

World’s Greatest Dad does suffers from pacing issues and the last act is a little rushed which does effect the dramatic tension. There are also a few moments which make you wonder if Goldthwait is really parodying Hollywood or just exposing his limitations as a director. Either way, World’s Greatest Dad is fresh, entertaining and full of surprises. It might not be exceptional but it’s definitely inspirational.