Valentina Monti’s Girls on the Air (2009) provides a fresh portrayal of modern day Afghanistan, revealing a very different country to the stereotypical “war-torn” nation portrayed by the Western media. It focuses on a group of young Afghan idealists trying to make a difference in a country where the basic principles of democracy were destroyed, whilst exploring the value of freedom of expression in a place where that notion is in its infancy.

23 year old Afghan journalist Humaira Habib is founder of Radio Sahar, the first independent radio station born after the fall of the Taliban regime, and entirely run by women. In a unique example of a new democracy-building process in Afghanistan, Humaira fights every day for the rights of Afghan women.

Such a noble cause in the midst of a culture that is still finding the very concept of democracy unfathomable and impractical in relation to its own values is commendable for its bravery and tenacity. Humaira’s strength, aptitude, and strong leadership skills represent the potential of a nation that at long last is, albeit under the difficulty of present circumstances, able to express itself and unashamedly educate its people.

Monti builds a montage of the significant changes that are occurring in a nation that receives such imbalanced representation the world over. Whilst there are problems in Afghanistan, and its security is considered to be wholly unstable there are people trying to make a difference, and a younger generation that are keen to shape both their own and their countries future. 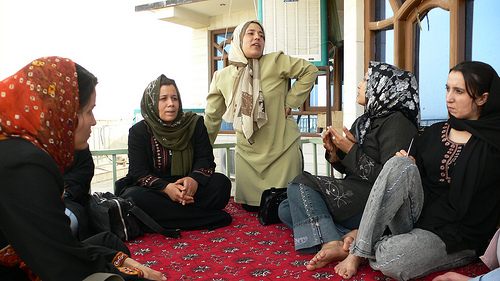 The long, uninterrupted shots employed by the director depict the manner in which Humaira and her colleagues communicate and work alongside one another, reminding us of the insignificant nature of our supposed differences; differences that discreetly find their way into the Western mindset as a result of anti-eastern propaganda – an example of Orientalism – purported by the Western media. This unique insight into post-Taliban Afghanistan proves very effective as it presents an unseen impression of a predominantly Islamic nation during the current climate of Islamaphobia in the west, to the westernised world.

However, aside from its importance as a film that provides westerners with an alternative representation of Afghanistan, Girls on the Air does not seem to have any specific focus. Whilst there are some important issues raised, its point seems to dissipate as the film progresses, giving less focus to the symbolic nature of Radio Sahar, and more attention to the personal life of Humaira.

Clearly, the importance of a medium like radio to the Afghan public is huge, and a more focused investigation of its significance would have been more effective. Further, it would have been interesting to see how every day Afghans feel about a radio station that is orchestrated by women alone. Such understanding would provide a real insight into the potentially changing values of Afghanistan.

Overall, Girls on the Air is enlightening and will surely open the eyes of the western world, but unfortunately it does lack a little focus. A more concise approach would have given this film much more of a lasting impact.