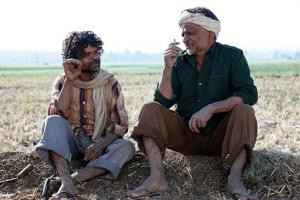 As an Aamir Kahn production, Peepli Live (2010) automatically carried with it a lot of respect and hype from the world of Indian Cinema. Directed and written by Anusha Rizvi, the film tells the tale of two brothers, Natha (Omkar Das Manikpuri) and Budhia (Raghuvir Yadav), whose farm is about to be seized by the government for failure to repay a loan. 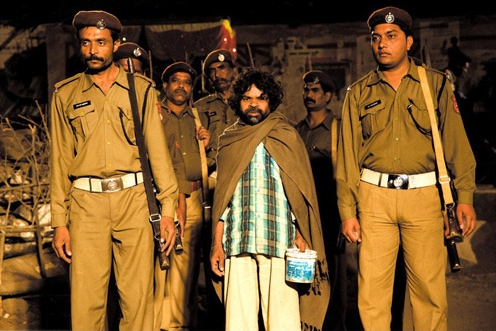 They brothers seek advice from an unsympathetic politician who informs them of a new government scheme where by if one of them commits suicide their family will receive aid. When a journalist overhears Budhia telling Natha to commit suicide for the sake of their family, a media frenzy erupts in their home village of Peepli.

Peepli Live is not your conventional Bollywood fair, and there is a great simplicity to the film both in terms of cinematography and dialogue. There are no complex and intrusive brightly coloured musical numbers that disrupt the narrative; instead we are presented with local folk songs that highlight the struggle of farmers in a bleak, rural setting. It attempts to cover a range of important political and social issues, namely the desperate situation that India’s poorest communities face.

Peepli Live also touches on the notion that in many poorer countries there is the belief that by moving to the city it will improve your economic situation. However, as one wily farmer states, “First you get screwed in the country, and then you get screwed in the city.” Ultimately, India’s poorest communities are damned if they do and damned if they don’t and this film attempts to highlight the plight of these communities by using absurdity and black comedy as a device for political commentary.

The film also uses the contrast of Delhi’s media industry with that of the poor farming communities of Peepli to further highlight the difficult of traditional ways of life. Peepli as a village seems incredibly outdated and is absorbed by the news crews that swamp in upon the announcement of Natha’s upcoming suicide. The story then takes a directly political spin where by the various parties vie for votes by helping the two brothers. At one point, one of the politicians presents the totally useless present of a TV to Natha clearly commenting on how out of touch politicians are with the needs of the people.

Despite the positives, as Peepli Live unfolds there is a distinct sense that the film is attempting too much, and yet isn’t doing anything particularly well. Although well acted, with some beautiful cinematography, it is not captivating and the moral and ethical issues that are dealt with are done so cheaply. In the end, one gets a strong sense that Peepli Live is not an Indian movie, but a Hollywood movie made in India.