Winner of the ‘Un Certain Regard Prize’ at the 2009 Cannes Film Festival, Porumboui’s latest effort is a darkly humorous police drama following disillusioned cop Cristi (Dragos Bucur) who begins to question his own morality – and that of the Police unit he serves – after being assigned to gather evidence against a local drug dabbling college student.

Porumboui’s satirical views on the Romanian police authorities are made very clear almost from minute one. In an early scene, Cristi’s questioning into the worth and validity of what he is being asked to do is rebuked by his senior officer, who states, “…you’re not qualified to comment on the law”, before going on to discuss the aesthetic merits of Paris, Prague and the Romanian city of Brasov. Throughout the film, the police’s stonewall policy towards even the most pedantic instances of drug use (e.g. smoking a joint in the street) is effectively used as a satirical microcosm for the Romanian authority’s heavy handed approach to all manners of law enforcement throughout the country, with Porumboui perhaps delicately pointing at a relationship between modern day policing and the nation’s police state past. 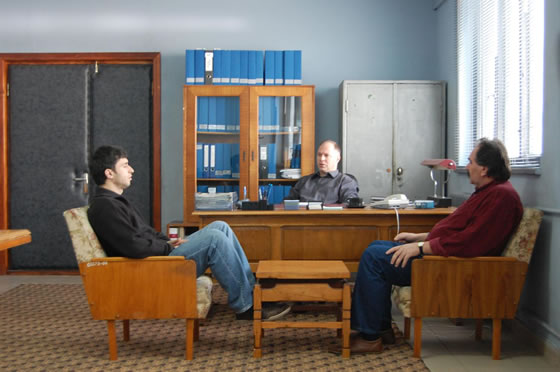 Stylistically, Police, Adjective takes the form of a semi realist social drama with strong elements of humour clearly running throughout. In terms of tone, the film is perhaps most easily comparable to British satirist/director Chris Morris’ suicide bomber farce Four Lions (2010), with a number of scenes trailing off into irrelevant, redundant dialogue that are as humorous as they are out of sorts. However, don’t expect the same frantic set pieces or non-apologetic deconstruction of modern life. Police, Adjective instead plays out to its own uniquely serene pace.

In the tradition of a number of other recent Romanian efforts (including the acclaimed 4 Months, 3 Weeks and 2 Days [2007]), Police, Adjective takes a very naturalistic approach to its subject matter, with a number of sequences consisting of little more than static/crawling camera shots capturing Cristi’s daily routine. However, the effect of interspersing such moments within a film as a whole does occasionally leave one feeling that the director is perhaps appealing to the European artistic sensibilities of critics and festival juries, rather than its cinema starved home market.

Although undeniably enjoyable on a number of levels, Porumboui’s Police, Adjective does seem to suffer a similar crisis of identity to its lead protagonist, unable to decide whether to strike out on its own or blend in the with the contemporary Romanian social realist crowd. Despite such formative confusion, the film can certainly not be accused of dumbing down or presenting a rose tinted portrayal of its country of origin. Despite ironic assertions to the contrary, the film’s non-descript city setting is not the “Little Prague” or “Little Paris” of government spin, but a dilapidated, ex-Soviet community going about its daily life with neither overarching melancholy nor fanfare.

Whilst the adjective ‘minimalist’ is often misconstrued as meaning “just plain boring”, overall Police, Adjective has just enough going on under the surface to forgive any absence of real pace or narrative motivation.