Adapted by Josip Mlakic from his award-winning novel of the same name and directed by Kristijan Milic, The Living and the Dead (2007) tells the tale of two bands of soldiers who fight under exact same circumstances and in the same location, yet with half a century between them. Originally screened at the Sarajevo Film Festival in 2007, Milic’s film is now available to own on DVD.

The two stories are skillfully woven together, flashing back and forth over the same geographical locations – most importantly the haunting “Graveyard Field” – as we follow both a group of HVO soldiers (Croatian Defence Council) in 1993 during the Bosnian War and their Domobran Partisan forebears who occupied Northern Bosnia fifty years prior.

The Living and the Dead is not a political piece that passes comment upon who was right or wrong during the depicted conflicts, instead choosing to focus upon the universal futility of war. The film opens with the assertion that, “We are all dead, only buried in order,” and the central message of the narrative is simply that a failure to take heed of the mistakes of the past dooms us to repeat them again.

Milic displays a deep sense of understanding, and has a clear vision of the message he wishes to convey. The cinematography itself is beautiful, with a weighty sense of melancholy pervading throughout. Standout sequences include the scenes set in 1943 in which Milic has chosen to use a delicate palette of colours, consisting of sepia hues and muted tones, complimented by soft lighting that lends an engagingly surreal quality to film without diminishing its reality. 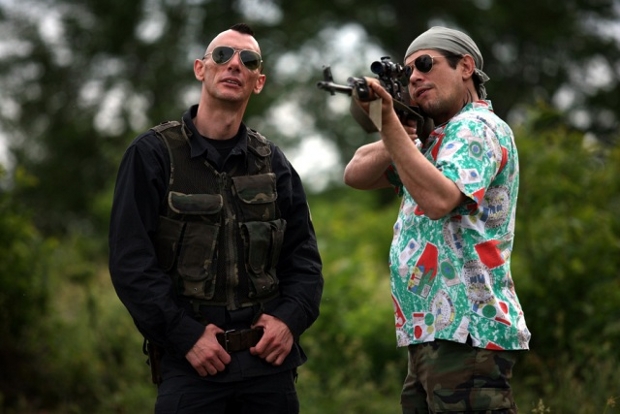 Milic balances this surreal vision of the past with scenes of searing realism set during the 90’s Bosnian conflict. Although he uses violence to generate a sense of the reality of war, Milic also consistently refuses to glamorise the soldiers’ plight, instead opting for slow motion and dramatic acts of infrequent brutality that bring home the visceral nature of military conflict.

The quality of the acting throughout The Living and the Dead further enhances this sense of realism. Far from being bombarded with grand acts of heroism, there is a gentle camaraderie between the men that is balanced with the very human ‘inhumanity’ common to all warfare. After the HVO soldiers attack a Turkish outpost, a soldier comments that he went to school with one of the men he has just shot and now wishes to borrow a knife to remove any gold teeth he may have. He then proceeds to start eating the meal the Turkish soldiers were preparing, happily noting, “This wasn’t destined for the one who made it.”

The reappearance of a cigarette case given to one of the HVO solider by his grandfather – who served in the 1943 platoon – is used as a focal point to bounce the stories back and forth. The introduction of a number of ghostly apparitions of dead soldiers as a motif also helps to blur the spatial and temporal limits of the story by linking together two sets of events, and further adds to the pervading sense of fear and mortality in the film, despite being a somewhat unoriginal device.

The Living and the Dead achieves exactly what it set out to do, illustrating e the pointlessness and futility of war, despite some issue with pacing and timing that serve to distance the viewer from the characters. During several characters’ death scenes I found myself barely noticing their absence or feeling a sense of loss, which is perhaps symptomatic of having such a large cast of central characters. Yet Milic’s film is a solid and compelling attempt at dealing with a subject that so often brings out either the best – or the worst – of a director’s sensitivity.