If you haven’t had the pleasure of making it to any of Bizarre Magazine’s ‘The Cut’ monthly underground cinema evening, then I strongly urge you to get your backsides down there. It’s free entry, you get one free beer (and bottles after that are a pound) and it’s chock full of eccentrics, horror aficionados and everyday citizens with a taste for dark rooms and good company.

The icing on the cake though was the presentation itself, Svetozar Ristovski’s The Last Victim (2010) based on the book of the same name. It deals with the relationship between college student Jason Moss and notorious serial killer John Wayne Gacy who was convicted of the murder of 33 individuals, mostly young boys whom he raped, tortured and buried in his basement. 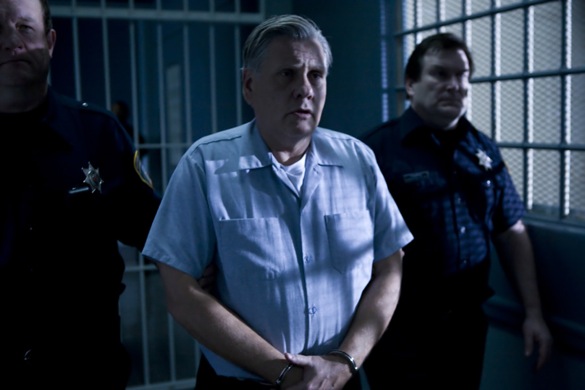 I knew a fair bit about Gacy as I was an avid reader of true crime casebooks in my mid to late teens so although I was interested I was expecting a trashy, badly made, disposable flick, when what I got instead was a wonderfully acted and absorbing psychological thriller. OK, so the direction wasn’t that interesting and the script contained the odd sloppy line which caused the audience to laugh in the wrong place but those were forgivable crimes.

The Last Victim is low budget independent film about a strange and difficult subject, not a megalithic studio production starring Jennifer Aniston as a florist with amnesia. If a movie costs $200 million and it’s flawed you have a right to bitterly complain. If it’s been made for peanuts by relative newcomers then shrug your shoulders, keep quiet and eat your damn popcorn.

The two leads are excellent. Jesse Moss as the student spiraling out of control was impressive and I’m surprised I’ve not come across him before. He reminded me of a young Sean Penn and given the right material I wager the man has the talent to produce some excellent work. William Forsythe is the main man though, and his portrayal of Gacy as being on the surface a charming, masculine and sensitive guy but underneath a sexually disturbed, manipulative maniac is beautifully played, not to mention brave. Most actors wouldn’t have the balls or the stomach to take on such a role and the man deserves credit and recognition for his effort.

In conclusion, The Last Victim is a worthy entry to the serial killer canon. It suffers from the odd unintentional comedy moment and in places it seems unrealistic. But if you stay away from spoilers and read nothing about the book on which the film is based then the pleasure of a few twists and surprises will be yours to savour.