The British gangster genre is not one which I have ever afforded much time. Whilst Hollywood has led the way in regards to gangster movies with classics such as The Godfather Trilogy, Goodfellas (1990) and Casino (1995), the UK has conjured up Guy Ritchie – a director of such dire ineptitude as to have single-handedly destroyed the genre by steeping his films in a world of pantomime villains and wholly insufferable “cockney geezers”. 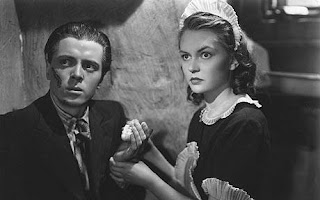 On watching John Boulton’s original Brighton Rock (1947), the level of the genre’s decline was made even more apparent. The film follows Pinkie Brown (Richard Attenborough), a young gangster running a protection racket at a race course in Brighton.

After he and his gang have a rival mobster murdered to look like a suicide, a local woman named Ida (Hermione Baddeley) becomes suspicious and sets out to discover the truth behind the man’s death. On meeting a young waitress called Rose (Carol Marsh), Ida realises that the girl may be able to reveal the truth as to what really happened. The ensuing events force Pinkie into an increasingly desperate situation, as he tries to maintain his status and keep the truth from being revealed.

Aside from the thoroughly gripping storyline, Brighton Rock displays an exceptional film noir aesthetic and exposition. Far from the present day cartoonish tone of films like Lock, Stock and Two Smoking Barrels (1998), Brighton Rock holds its veneer of brooding menace and underlying tension throughout.

This brilliant construction of dark intensity and imminent threat is embodied to perfection by the performance of Richard Attenborough, whose portrayal of Pinkie holds the film together spectacularly. His stern and occasionally manic demeanour is not only hugely iconic but also highly intimidating, often staring into space whilst fiercely wrapping a piece of string around his hands, as if preparing to garrote someone with it. 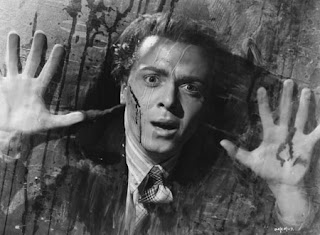 The performance of Carol Marsh as Rose is also extremely impressive, providing just the right level of innocence and naivety to the character to keep the audience on her side, even as she continues to protect Pinkie in spite of his terrible crimes.

Despite Brighton Rock’s numerous outstanding attributes, it is still a far from perfect piece. One particular thing which I found frustrating were the occasional moments of erratic nastiness from Pinkie. For instance, when recording a gramophone message as a present to Rose, he inexplicably rants about how he hates her and is only marrying her to secure her silence. Not only is this action extremely stupid and uncharacteristic due to the fact that he is trying so hard to keep his secret under wraps, it is also a completely pointless device to remind the audience that he’s the villain of the piece; a fact that should be pretty obvious to anyone from the moment Attenborough first appears on screen.

Whilst Brighton Rock may not quite be the masterpiece it is sometimes lauded as, it is still immeasurably superior to the vast majority of crime films produced in the UK in recent years. One can only hope that through the renewed interest in the original generated by Rowan Joffe’s 2011 re-imagining, future directors may just look back to Boulton’s film as a template for the next stage in the development of the British gangster genre.