Emma Stone is destined for greatness. In 2011 we will have the pleasure of catching Ms. Stone alongside Steve Carell in Glenn Ficarra’s Crazy, Stupid, Love (2011) before stepping back in time to 1960’s Mississippi for The Help (2011). However, it’s in 2012 that Stone will be catapulted into the stratosphere when she gets up close and personal with the web slinging Andrew Garfield in The Amazing Spider-Man (2012). But let us stop gazing into the future for a moment and instead concentrate on her most recent cinematic outing Easy A (2010), out now on DVD and Blu-ray.

Stone plays Olive, a clean cut, wise cracking High School student who – when faced with financial meltdown – offers to allow the school’s unpopular geeks to claim they lost their virginity to her if they pay for the privilege. Of course, the rumours soon spiral out of all control and Olive begins to be viewed by her peers as being a woman of ‘loose morals’. Although she enjoys her new found popularity for a while, she eventually begins to regret cultivating her own brazen reputation. 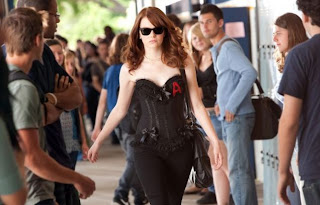 Based on Nathaniel Hawthorne’s infamous novel The Scarlet Letter, in Easy A director Will Gluck has provided  us with a sarcastic and expertly observed adult take on what is essentially, a teen movie. Think Mean Girls (2004) and the tragically underrated religious school comedy Saved (2004) and you will get close to the style of mood and humour on display.

Stone excels throughout, slipping with ease and confidence into the lead role after her side-kick turns in The House Bunny (2008) and Zombieland (2009). She’s the total package, and her cool delivery of an already exceptionally witty script proves that she has a rare gift comedy. Further still, I’m convinced that Stone would make an excellent stand up and would gladly fork out a fistful of shillings to see her live on stage. Amanda Bynes is also on fine form as Marianne, the last bastion of Christianity and thorn in Olive’s side. However, it’s Stanley Tucci and Patricia Clarkson who steal all the best lines and gleefully revel in their roles as Olive’s liberal parents Dill and Rosemary.

If any lost soul reading this is still thinking this movie has the unmistakable whiff of a chick flick then let me assure you now that Easy A has something for all ages and persuasions. It deals with issues of morality without moralising, and although the language might be a little harsh for those of a sensitive disposition, the majority of you should lap it up before telling all your friends just how good it is.