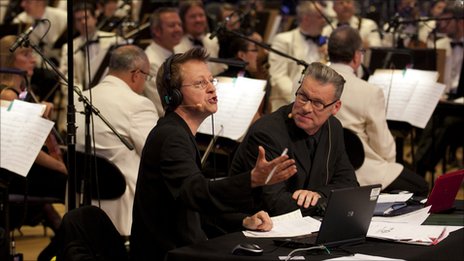 This month sees the celebration of a decade of movie musings from Simon Mayo and Mark Kermode on their highly respected yet enduringly accessible film review show. In recognition of their achievement, CineVue were invited along to Auntie Beeb’s new (and very shiny) hub at Media City, Salford, for an afternoon with the BBC Philharmonic Orchestra as they recreated some of the greatest film scores of all time.

As well as the usual weekly review show, the audience were treated to excerpts from stellar scores from films including Star Trek, Taxi Driver (1976) and Raiders of the Lost Ark (1981). Even Kermode himself joined the orchestra for a haunting Midnight Cowboy (1969) harmonica solo, a timelessly simple yet striking melody.

The series of programmes that went along with this broadcast (available on BBC 5 Live) presented some interesting questions concerning the composition and importance of the film score: firstly, what is the legacy of a great soundtrack? Should it be appreciated in its own right, regardless of the quality of the film, or is it fated to become synonymous with the landscape, characters and narrative it’s written for? Whilst I’d usually be tempted to argue in favour of the latter, on this occasion I was surprised by just how much I enjoyed the orchestra’s rendition of the theme from 2046 (2004): despite my ignorance of the film, the music seemed no less moving than any of the other featured excerpts (so moving in fact, I now feel compelled to see the film).

Truly great musical scores, it seems, begin as great musical ventures that often have the capacity to take on a life of their own, outside the realms of the cinema and disconnected from the image. Though of course, 2046 being an acclaimed film, its score was bound to be noticed – the same is probably not true of worthy compositions which are lost under the weight of poorly received films.

Secondly, does a memorable theme tune make for a successful score, or is the scale and variety of an entire soundtrack equally important? It’s difficult to forget the diverse moods and tones created by something like The Lord of the Rings (2001) epic soundtrack, whereas (I’m rather ashamed to say) I distinctly remember laughing during most of Franco Zeffirelli’s Romeo and Juliet (1968) simply because it’s main theme was so frequently reprised. Furthermore, its ubiquitous usage throughout popular culture meant that I had heard the melody countless times prior to watching the film, mainly in contexts associated with comedic portrayals of romance. Perhaps this was why I so casually dismissed a masterpiece by Nino Rota (composer of the Godfather Love Theme no less) as a soppy cliché. A case in point, that sweeping popularity can sometimes be a double edged sword.

With the exception of 2046 and music from There Will Be Blood (2007) the majority of the films included in the programme were instantly recognisable as ‘definitive’ cinematic classics (Star Trek, James Bond etc). Given the clear success and sheer magnitude of these decade-old, time weathered tunes, is the golden age of the movie score over?

Though acclaimed composers such as Hans Zimmer remain active (Inception (2010), Pirates of the Caribbean (2003)), the point was made that original soundtracks are becoming something of a rarity. When tightening the purse strings, many directors opt for the cheaper practice of using an existing repertoire of popular music to accompany their work, rather than going to the expense of commissioning new pieces.

But does borrowing from the back catalogues necessarily demote the significance of the soundtrack? Whilst the use of popular songs in your average, churned out rom-com may seem unsurprising and ineffectual, a carefully selected soundtrack can eradicate the baggage of familiar songs and transform them into something more poignant when combined with the images on screen. The chilling use of cheesy chart hits in American Pyscho (2000) seems like a good example: thanks to that film, I’ll never listen to my mum’s Phil Collins’ collection in the same way again. Elliot Smith’s Between the Bars perfectly captured the emotional intensity of Good Will Hunting (1997), and who can forget the iconic scene from Pulp Fiction (1994) as Uma Thurman and John Travolta dance to Chuck Berry’s ‘You Never Can Tell?’ For me, my memories of these songs are irreversibly fused with the characters and stories they accompanied.

The notion that no one composes original film music anymore is of course, a sweeping generalisation. One only needs to watch a Danny Boyle film to hear the foreboding and intense music of English composer John Murphy. However, even Boyle incorporates a mixture of original work and mainstream music: Bill Withers’ easy listening classic ‘Lovely Day’ was used to great ironic effect in 127 Hours (2010), and Murphy himself recycles his own compositions (the chilling ‘In the House in a Heartbeat’ used in 28 Days Later (2002), 28 Weeks Later (2007) and Kick-Ass (2010) and in several other mediums). Still, these scores are far more memorable than soundtracks comprising of here today, gone tomorrow music, for here today, gone tomorrow films.

It remains to be seen therefore, what will match the magnitude of the beloved Star Wars (1977) score and the popularity of The Magnificent Seven (1960) theme in years to come? Which new soundtracks will Kermode and Mayo select for their next broadcast with the BBC Philharmonic? Whether created by the magnificence of an orchestra, or thoughtfully selected from songs already in existence, a truly great movie soundtrack is clearly one that can not only stand alone as evocative music, but one that works in symbiosis with the image – an interdependency which enhances the sensory experience at the time of viewing, and has the power to re-invoke memories of cinematic moments years, if not decades, later.